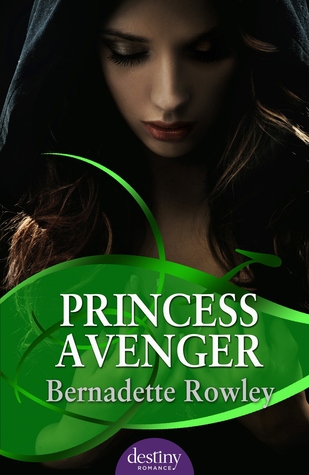 Passionate and headstrong, Alecia is no ordinary princess. Angered by the cold-blooded murder of her first love, she sets out to avenge his death.

Army Captain Vard Anton, the epitome of masculine strength and grace, is dealing with some dark secrets of his own. When he is appointed Alecia's body-guard, both find it hard to ignore the chemistry between them.

With assassination attempts and the threat of an arranged marriage looming over her, Alecia realises her time is running out. But Alecia's biggest battle is the one within as she tries to suppress the raging desire she feels for the powerfully attractive Vard. Can Alecia resist Vard while trying to exact revenge and avoiding the lecherous attentions of her husband-to-be? Will the power of love and desire be enough to unite Alecia and Vard forever?

Though separated by class and palace intrigues, Alecia and Vard are entwined by desire in this wonderful fantasy romance.

I had really high hopes for Princess Avenger by Bernadette Rowley. I may haven't read any reviews about this book prior to me picking it up but still, from the premise I was certain that I had an amazing story in my hands. And although in some departments, Princess Avenger delivered what the premise promised, in others, it didn't fair so well I'm afraid.

For the first 1/3 of the story, Princess Avenger was everything I was expecting it to be. There was an intricate world building, a strong and independent heroine and a very mysterious and sexy hero. I mean, everything at the beginning was indicating a fresh and unique story, having all those elements I'm searching for. But before I even reached the middle of the story, my initial thoughts about Princess Avenger started to change rapidly. I found myself tired and a little bit bored, so I had to put it down, read another book and then continue with it. I don't usually do this. When I start a book I either put it aside or finish it. I rarely pick up again a book that I stopped reading. But I had to give it another try because like I said, at the beginning I really liked it. And my three star rating reflects mostly that part and the fact that even if I couldn't connect with the story, Bernadette Rowley's writing style is pretty good.

My main problem with the book was with the world building. It was rather ambitious, but Princess Avenger never delivered in that area. It's mostly a fantasy novel with a focus on romance and let's face it, the beginning and end of a fantasy novel is the world building. At least for me. But unfortunately in this story the world building is loose and vague. Details are never given about how exactly the world ticks or what is going on. The whole plot is based on the fact that the reader takes everything described as given and never asks any why's or how's. And that is a major failure for me. Maybe the fact that Princess Avenger wasn't really that long a book, explains why the world building was a little bit vague. But still, I just can't take everything for granted.


The other problem is that Princess Avenger is primarily a romance and then a fantasy novel. And I have nothing against that, if and only if, the romantic plot isn't explored against the basic plot of the whole story. And sadly, that was the case with Princess Avenger. After a point, everything was focused on the romance between Alecia and Vard and everything other was lost. Never explored. The whole book was about them and all the other interesting things happening at the same time where just completely brushed off. There wasn't a balance. And still, if the romance was good, I may still not be having that many problems, but their romance was also sort of lukewarm. Maybe because both Alecia and Vard (especially Vard) felt so distant. As for the rest of the characters, they might as well haven't been there. There was no character development or there was, but a minimum one.

All in all, Princess Avenger was a rather ambitious attempt that I'm pretty certain that it could have been so much better. There was potential in there. But unfortunately, it failed to impress me and catch my interest.

* This title was provided for a review through NetGalley