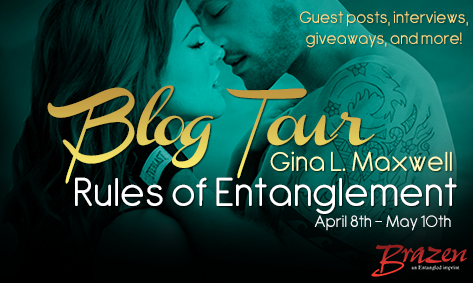 Today I'm very excited to be the next stop in the Blog Tour for Rules of Entanglement by Gina L. Maxwell! Since I read the first book in the Fighting for Love series I just couldn't wait to get my hands on the sequel! Well, the time has finally come and let me assure you that Rules of Entanglement is as good as Seducing Cinderella and then some! Today I have an excerpt of the book to share with you and not just one but two giveaways! You can read all the details at the end of the post and you can also see the full Blog Tour schedule here for more chances to win the amazing prizes!


Jackson watched Vanessa walk back to the couch and settle in with her laptop again. Something was off about her answer. She was so jaded when it came to men and relationships, and yet no one had hurt her in the past? It didn't make any sense. She was a puzzle with missing pieces, and he wanted to find them.

"How long do you plan on working today?"

She looked up briefly, then continued jotting notes on a yellow legal pad on her knee. "I don't know, probably for a while yet."

"Have you been doing that all morning?"

"Yes, I have. What were you doing all morning?"

He smiled and leaned his hips back on the counter. "Afraid I'd run off with the maid, darling?"

She looked up, gave him an exaggerated smile, and batted her eyes innocently. "I'd hoped."

He slapped a hand over his heart. "Wife, you wound me."

"I'm not your wife yet, sugarbug, and once I can figure it out, I won't be your fiancée for much longer, either."

"Well," he said, rubbing his hands together, "then I'd better make the best of it until then. You've got exactly a half hour left to toil on those boring-ass files before I whisk you away from here."

"Since when did fiancé become interchangeable with master? I'm not going anywhere until I'm damn good and ready."

He walked over, cupped her chin in his hand, and kissed her firmly on the mouth. “Then get damn good and ready in exactly half an hour." Then he left the bungalow and a stunned redhead behind.

It took him only about twenty minutes to get the things he needed for their afternoon. He'd hunted down Robert, who had only been too happy to help him put a picnic basket together with food from one of the restaurants and some bottles of water. Since he had a few extra minutes, he stopped at the beach bar and enjoyed the view of the crystal blue ocean and chatted with the bartender.

Thirty minutes past the time he’d left, he walked up the path to the bungalow with basket in hand, fully expecting to find Vanessa in the same spot he'd left her. But to his surprise she was sitting in one of the Adirondack chairs on the front lanai, arms crossed and a stern look on her face.

"You didn't tell me how to prepare."

Jackson stood still, not wanting to make any sudden movements and scare the animal into an attack frenzy. "Holy shit, are all women like this? If you told me to be ready in a half hour I would've made sure I wasn't indecently exposed, then pulled a sixer of beer out of the fridge for the trip."

She threw her hands up and let them fall to slap her thighs in frustration. "Why am I not surprised?"

That’s when it hit him; this wasn’t anger. It was distress because she didn’t have control over the situation. She stopped working, so she obviously wanted to enjoy an afternoon out of the house, but given the circumstances, she didn’t know how.

Setting the basket on the steps, he walked over to her and brought her up by her hands. "I'm sorry. I didn't realize you needed more information. Next time I'll make sure you at least have an idea of how to prepare for any surprises I make for you. Deal?"

"Next time?” Her face softened and the sparks quelled in her green eyes. “You plan on giving me more surprises?"
He hadn't really thought about what he said, but now he took a few moments to evaluate it. "Yeah, I think I will. I don't have anything in mind at the moment, but something tells me I'm going to like keeping you on your toes."

Growing up in small town Fort Atkinson, WI, Gina L. Maxwell, formerly Bisbee, could often be found onstage in the latest theatrical production, performing with her high school show choir, or holding office in her local FFA chapter. She dreamed of following in her father’s footsteps in the entertainment business, of enabling her audience to forget about life for a few hours as they enjoyed the stories she told through her love of singing, dancing, and acting. It wasn’t until her sophomore year in college when she realized she had no acting talent to speak of and her dream needed some adjusting. Another ten years would pass before she discovered a different means to accomplishing the same dream.

Within those ten years Gina married her high school sweetheart, had two beautiful children, and moved more times than she cared to count. In 2009 she started writing as a hobby while her kids were in school, and it quickly became an obsession she couldn’t stop, and then a dream to publish stories of love and passion for romance addicts just like her.

Three years later, her dream came true when she signed with Entangled Publishing for a total of seven books in two of their imprints.

The first book in her paranormal romance trilogy, Desires of the Soul, is set to release both digitally and in mass trade paperback in Summer 2013 for the Entangled Select imprint.
When she’s not writing or wrangling plot bunnies, Gina keeps busy with her wonderful family and their ever-growing extra-curricular schedules. Thanks to their immense patience and support, she’s able to do The Thing She Was Meant To Do and live her dream of bringing a little romantic fantasy to the world, even if only in the pages of a good book. District Attorney Vanessa McGregor firmly believes that structure and order are the stuff that dreams are made of. Happiness can be planned - and it starts with seven rules she's laid out for her future. But as she's organizing her best friend's wedding in Hawaii, all of Vanessa's best-laid plans are about to meet their match in a wickedly hot MMA fighter...

Jackson "Jax" Maris is focused on surfing, training and fighting. That is, until he opens up his big mouth, and finds himself having to pretend he's engaged to his little sister's best friend, Vanessa. When they're force to share a romantic bungalow, however, their little charade suddenly takes a turn for the seriously sexy. And while Jax is definitely not part of Vanessa's long-term plan, he has seven days - and seven naughty nights - to turn her seven-rule plan upside down. 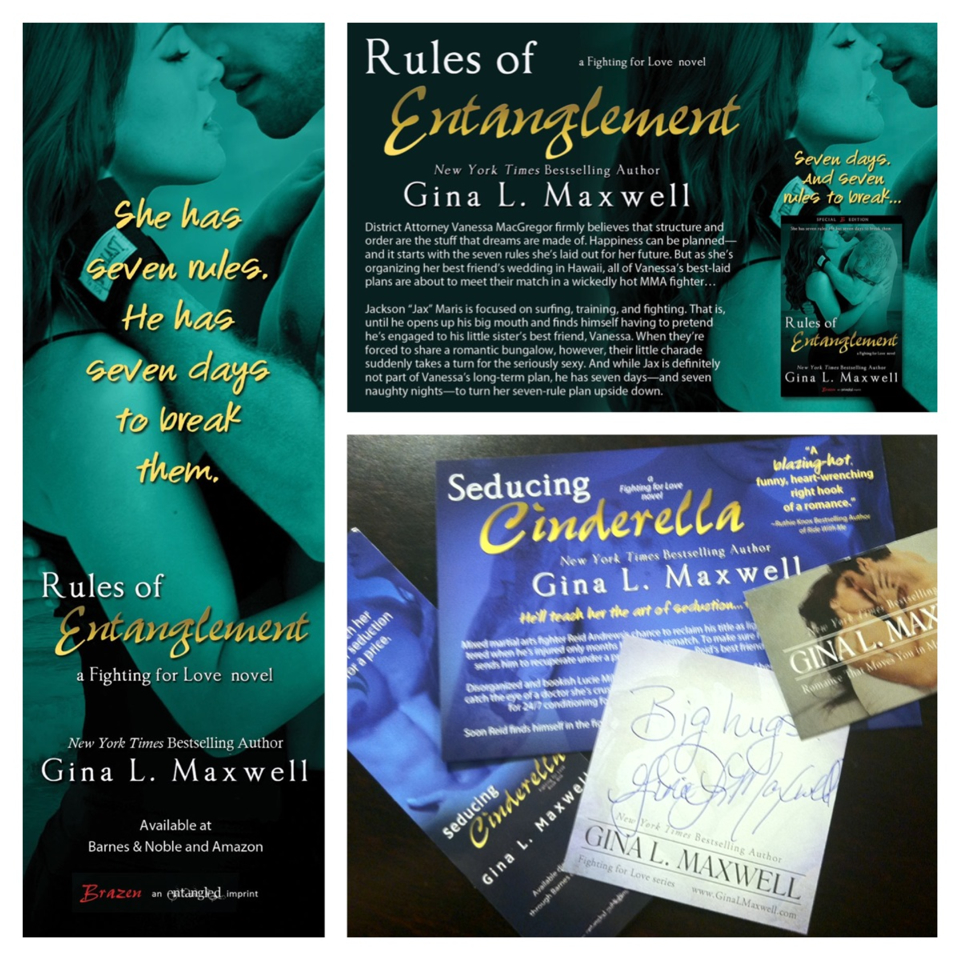 Giveaway 1: Entangled Publishing is generously offering  1 Seducing Cinderella and Rules of Entanglement swag pack to one lucky winner.Open to all!

Guidelines
~ The contest is open to all.
~ You must be 13 years old or over to participate.
~ The winner will be chosen via Random.org
~ The prize is submitted by the author/publisher and I have no responsibility whatsoever over it.
~ The contest will be open until May 18th.
~ The winner will be notified via e-mail and will have 48 hours to confirm his/her e-mail address before a new winner is selected.


Giveaway 2: There's also a Tour Wide Giveaway in celebration of the Rules of Entanglement release where one lucky winner will receive a Kindle Fire HD or a $200 Amazon Gift Card. Just fill the form below to enter.