The Marriage Mistake by Jennifer Probst 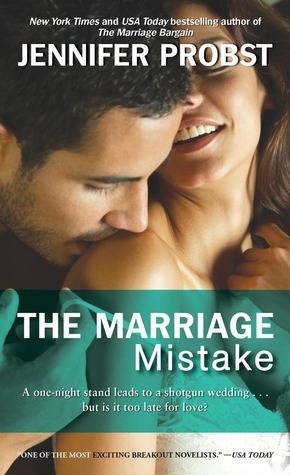 Carina Conte has had a crush on her brother Michael’s best friend, Max Gray, since she was a teenager. Now she’s earned her MBA and come to work at Michael’s new venture, America’s fastest-growing bakery empire. But some things never change: her family still treats her like a child. With three drop-dead gorgeous siblings, she’s still the ugly duckling of the bunch. And Max, the company’s new CEO, still barely notices her.

Max knows Carina Conte is strictly off limits. But hot-blooded lust wins out at a conference when the two share a scorching one-night stand—and are busted by her mother! Now, forced by old-world Italian tradition into a marriage he’s not ready for, Max is miserable—and Carina is furious. Her new husband is about to realize that hell hath no fury like a woman transformed…


Reading The Marriage Mistake was so much more fun than reading the previous title in this series! It was so much fun that I just couldn't put this book down. I just loved it! It was fun and cute and super sexy and in overall a contemporary romance title written exactly in the way I like.

The third instalment is Jennifer Probst's Marriage to a Billionaire follows the exact same pattern the previous books do, but in this case, I really loved both Carina and Max, much more than I did Michael and Maggie of the previous title. Especially Carina is so much more fun to read than Maggie was and I didn't have any problems with her, like I had with Maggie. Minor problems, I know, but they had managed to spoil some of the fun of the book, whereas here, I'm perfectly content with both my main characters.

I just knew that this story would work better for me, even while reading The Marriage Trap. You see we got to know a bit about Carina from that book, so, I knew that she would be a heroine right up my alley. And in Marriage Mistake, she proves just that. And at this point, I should add that the woman Carina grew up to be was even better than what I expected. I liked her confidence, especially after witnessing her self-esteem problems in the second book, and the way she knew exactly what she wanted from her sex partner, even if she was relatively inexperienced.

Max on the other hand, is as much an alpha male as one could hope for, without being a caveman occasionally like Michael did. He was drool worthy and sexy as hell, a hero I always appreciate reading about.

The story is typical for a chick lit title, even cheesy at times, but it's written in such a fun way that I couldn't care less. After all, the premise let's the reader know exactly what he/she should expect from this story, so if you don't like what the premise is about, then don't try this one. If like me, you search for a hot, cute and light read, then The Marriage Mistake is just the book for you.

All in all, The Marriage Mistake was exactly what I had hoped it to be and I had a really good time while reading it. So good a time that I can't wait for any future releases of this author :)

*This title was provided for review from Edelweiss
Posted by Unknown at 17:49