REVIEW: How Beauty Saved the Beast by Jax Garren

How Beauty Saved the Beast by Jax Garren
Series:Tales of the Underlight, #2 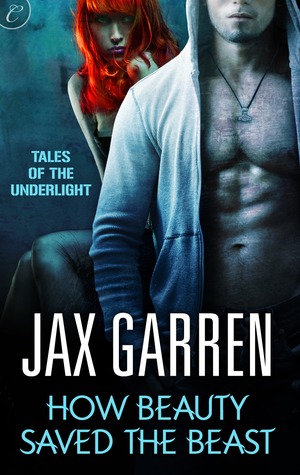 Jolie Benoit left her old life behind to become an agent of the Underlight. Training under Sergeant Wesley Haukon, she’s honing her combat skills, all the while coping with the intense sexual attraction she feels for Hauk. She keeps their friendship casual, but when his high school sweetheart transfers into their division, Jolie finds herself grappling with jealousy.

The Underlight gave Hauk a purpose, but he can’t escape his past completely. The physical and emotional scars from the fire that killed seven fellow Army Rangers will mark him forever. Jolie sends his protective instincts into overdrive, but he’s convinced he’ll never be worthy of her love.

Hauk is determined to keep Jolie from harm. But when the Order of Ananke ambushes them with a new weapon that neutralizes Hauk, making him vulnerable, it’s Jolie who must tap into her hidden strengths to rescue him—or risk losing him forever…


If you read my review of the first book in Jax Garren's incredible Tales of the Underlight series, then you know that I fell in love with it! So, to say that I couldn't wait to get my hands on the next book, would be an understatement. And even though it took me a while to finally read it *hangs head in shame* I can't even begin to describe how much I loved How Beauty Saved the Beast! Jax Garren is an author you need to watch out for. She's incredibly talented!

How Beauty Saved the Beast starts exactly where the first book ended and Jolie finds herself torn between her feelings for Hauk and her mission with the Underlight. The tension between them is simply delicious. They can't live without the other but still try to fight their feelings. They kiss and then they drive each other apart, all because they are afraid of what their feelings can cause. Not to the mission, but because of what those feelings mean for them. The way Jolie is jealous of Hauk is plainly adorable.

Apart from that, the second instalment, has everything that made me love so much the first book and then some. You still get the same beautifully written, character driven story but enhanced with some delicious sexual tension. How Beauty Saved the Beast may not be a very long story, but still, Jax Garren manages to explore every main and secondary character to his/her full potential. And that is what I love most about this series and this author. How all her characters have their own place in the story and evolve.

I won't say anything about the story itself, I hate spoilers, so the only thing I will say it is that it's fast paced and action packed. Jolie isn't just a pretty face. She can seriously kick some ass! And Hauk..., well, like I said, I have to love and care some much about a male character since Terrible from Stacia Kane's Downside Ghosts series. Maybe because they are both deeply scarred heroes, both physically and emotionally. I don't know. What I know is, that both of them are among my favorite ever fictional characters!

All in all, Jax Garren doesn't disappoint with her second book and all I can say is that I can't possibly wait for the last book in the series!

* This title was provided for review via NetGalley