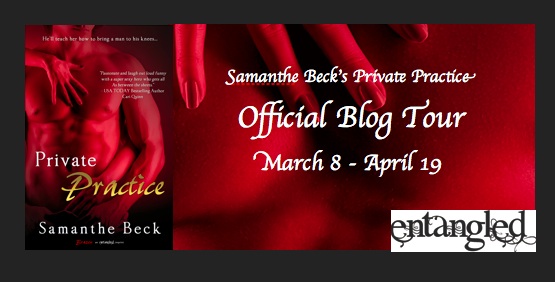 Today I'm very excited to be the next stop in the Private Practice Blog Tour! Private Practice is the debut novel for Samanthe Beck with Entangled Publishing and it's the story of a smart doctor who falls in love with the man who teaches her how to seduce the man of her dreams! I don't know about you but I just can't resist those stories :)
Samanthe stops by today to talk all about Private Practice and answer a couple more of my questions! So, let's give her a warm welcoming and don't forget to check at the end of the post for the giveaway details :)

Anna: Hello Samanthe and welcome to Books to Brighten your Mood! Could you please tell us a bit more about your newest release with Entangled, Private Practice?

Samanthe: Thanks for having me! Books to Brighten your Mood is the perfect place to talk about Private Practice, because that’s why I wrote it—to brighten a reader’s mood, give her a giggle or two and deliver the all-important happily-ever-after. Private Practice is my debut novel and I’m thrilled “my first time” was with Entangled’s Brazen line. I definitely can’t wait to do it again! To give you the cocktail napkin summary of the story…Dr. Ellie Swann returns to her tiny hometown of Bluelick, KY to open her general practice, but, before the ink dries on her “The Doctor Is In” sign, she learns the object of her secret—and completely unrequited—adoration, Roger Reynolds is newly single. According to his ex-fiancé, Melody, he’s in the market for a wild, sexually adventurous woman. Ellie’s wondering how she can turn herself into his perfect sexy soul-mate when local bad-boy Tyler Longfoot shows up on her doorstep at 2:00 a.m. with a jealous drunk’s bullet in his butt and a question on his lips. What can he do to convince her not to report the incident to the authorities? Tyler’s a walking, talking wealth of sexual know-how. All of the sudden, Ellie’s ready to negotiate the price of her silence!

Anna: Tyler is obviously a really bad boy! What’s that certain appeal that makes bad boys so irresistible to everyone, proper and good girls included?

Samanthe: One of the best parts about writing “Private Practice” was the chance to get up-close-and-personal with Tyler! He’s six-foot, two inches of Harley-riding, hell-raising naughtiness, and just the right man to show Type-A Ellie how to unleash her inner wild woman. I think that’s a big part of the bad boy appeal…they give us the chance to let our bad girl out to play.

Anna: Could you please give us a short physical description of your two main heroes, Tyler and Ellie?

Samanthe: Tyler’s tall, dark and dangerously sexy, with flashing green eyes that leave a girl with no mistake about his intentions and a wicked smile that makes her wish he’d hurry!

Ellie describes herself as a short, brown haired, brown-eyed former nerd. Tyler, on the other hand, has this to say when he sees her for the first time in ten years: The crazy cap of frizzy ringlets she’d never quite tamed as a kid had turned into a tumble of smooth, ebony waves. Pert features and dimpled cheeks had matured and refined, so the grown-up version delivered a one-two punch of sweet and sexy. Back in the day, she’d worn glasses so thick she could see into next week, but now, only big, brown Bambi eyes blinked up at him. And that mouth. Even bare, it looked soft and ripe and kissable.

Anna: If Private Practice would become a movie who will be your top choices to play Ellie, Roger and Tyler?

Samanthe: I think people expect me to cast Rachel Bilson as Ellie, because of the whole small-town doctor, Hart of Dixie angle, and I love her, but the actress in my head when I wrote the story was Mila Kunis.

I had a harder time finding a real life Tyler. Honestly, the guy on the book cover worked for me. Let’s say a buffed-up, green-eyed Ben Barnes.

In my mind, Roger was a young Paul Walker…blond, blue-eyed, impossibly good looking.

Anna:  Roger is Ellie’s dream man but she is tempted by Tyler when she tries her best to get what she wants, which is Roger. I was wondering how easy is it in your opinion to fall in love with the image you have created of a man rather than the real man.

Samanthe: I think the whole “dream guy/girl” phenomenon accounts for why we love celebrities. We don’t really know them—we connect with the image they project. We fall for a pretty container and a persona we invent for them based on very limited exposure to the person. Is it really love? No. Of course not, (though, if you’re reading this, Matthew McConaughey, yes…it’s really love).

Anna: Tyler teaches Ellie how to seduce the guy of her dreams. How difficult is for the “teacher” to fall for his “student”?

Samanthe: It takes Tyler some time to sort out lust from deeper emotions, but he knows something feels different with Ellie pretty early on. He enjoys her as much outside of the bedroom as he does in it. He likes messing with her—taking her carefully laid lessons plans and just effing them all the hell up—because she’s fun to play with. But Ellie triggers some serious feelings too. She has a difficult relationship with her dad, which brings out Tyler’s empathy as well as a boat-load of protective instincts, and that’s new for him. She holds back the real reason for their “lessons,” but he figures from the get-go she’s building her bedroom repertoire in order to impress someone. Before long he’s jealous of this mystery man, which is also a new experience for him.

Anna: What are your future plans? What should we expect from you after Private Practice?

Samanthe: I’m like pre-schooler-at-the-petting-zoo excited-slash-terrified to announce I have a new Brazen coming out in April, called Lover Undercover! (Pointless anxiety is part of my charm).

Anna: Is there any author who influenced your work?

So many! Could I be the love child of Nora Roberts and Jill Shalvis--the one neither one of them ever talks about? I’ve read and loved all the other Brazen authors, including my release-sisters, Christine, “Down & Dirty,” Bell and Tessa, “Protecting What’s His,” Bailey. Samanthe: I’m a beach bum lucky enough to live close to the shore in Southern California. An ideal afternoon involves my husband, our four-year-old son, and sand. Lots of sand. Throw in a (sand-free) frozen margarita and I’m in heaven.

Samanthe: I’m such a cold weather wimp, (I know, I know…winter in Los Angeles…wah, wah). I’m embarrassed to admit I’ve been fantasizing about Tahiti lately. My three favorite words: over water bungalow.

Thank you Samanthe for being here today :)

Sam was transfixed from an early age with any tale featuring a handsome prince, a great dress, and, of course, the all-important kiss, and eventually aspired to write her own happily-ever-afters. Naturally, she became a lawyer. The legal world heaved a sigh of relief a few years ago when Samanthe retired from law to take the plunge as a writer.

When not living the glamorous life of a romance author (i.e., chained to her computer), Samanthe keeps busy with the care and feeding of her extremely patient prince-charming of a husband, a not-so-patient ball of energy known as their son, a furry ninja named Kitty, and Bebe, the trash talkin’ Chihuahua. Their love, support, and willingness to eat Pizza Hut three or more times a week enables Samanthe to pursue her literary dreams.


About the Book
Title: Private Practice Dr. Ellie Swan has a plan: open her practice in tiny Bluelick, Kentucky, so she can keep an eye on her diabetic father, and make hometown golden-boy Roger Reynolds fall in love with her. But Ellie has a problem. Roger seeks a skilled, sexually adventurous partner, and bookish Ellie doesn’t qualify.

Tyler Longfoot only cares about three things: shaking his bad boy image, qualifying for the loan his company needs to rehab a piece of Bluelick’s history, and convincing Ellie to keep quiet about the “incident” that lands him on her doorstep at two a.m. with a bullet in his behind.

The adorable Dr. Swan drives a mean bargain, though. If sex-on-a-stick Tyler will teach Ellie how to bring a man to his knees, she’ll forget about the bullet. Armed with The Wild Woman’s Guide to Sex and Tyler’s lessons, Ellie is confident she can become what Roger needs…if she doesn’t fall for Tyler first.

Entangled Publishing is generously offering one e-copy of Private Practice to one lucky winner. Giveaway ends April 21st and it is open internationally.

~Guidelines~
~ The contest is open to all.
~ You must be 13 years old or over to participate.
~ The winner will be chosen via Random.org
~ The prize is submitted by the author and I have no responsibility whatsoever over it.
~ The contest will be open until April 21st.
~ The winner will be notified via e-mail and will have 48 hours to confirm his/her e-mail address before a new winner is selected.