REVIEW: The Coincidence of Callie and Kayden by Jessica Sorensen

The Coincidence of Callie and Kayden by Jessica Sorensen 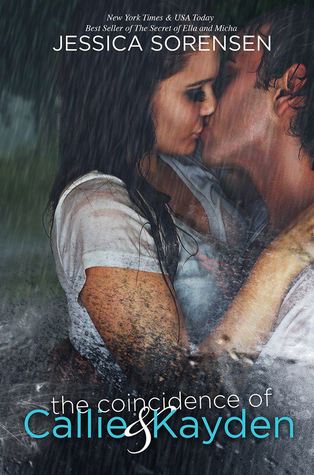 Luck was not on Callie’s side the day of her twelfth birthday when everything was stolen from her. After it’s all over, she locks up her feelings and vows never to tell anyone what happened. Six years later her painful past consumes her life and most days it’s a struggle just to breathe.

For as long as Kayden can remember, suffering in silence was the only way to survive life. As long as he did what he was told, everything was okay. One night, after making a terrible mistake, it seems like his life might be over. Luck was on his side, though, when Callie coincidentally is in the right place at the right time and saves him.

Now he can’t stop thinking about the girl he saw at school, but never really knew. When he ends up at the same college as Callie, he does everything he can to try to get to know her. But Callie is reserved and closed off. The more he tries to be part of her life, the more he realizes Callie might need to be saved.

This story has everything I look for in a book. A great set of leading characters, well developed secondary characters, a great and touching story and a romantic plot that is not only sweet and touching but also has an even pace.
The Coincidence of Callie and Kayden has a toe curling romance and since that was the story’s primary focus, I can only say that Jessica Sorensen delivered exactly what the premise of this book was promising its readers.
There’s no insta-love, there’s only a romance that blooms between two very tortured young people. And here I have to say that Sorensen handled with great sensitivity both the matter of raping and that of domestic violence. Both Callie and Kayden behaved and reacted in certain situations in a way that is consistent with victims of such violence. The author didn’t try to sugarcoat things, or sweeten up the ugly reality, she just wrote about two survivors who manage to overcome their demons and find their happily ever after. Or do they? The cliffhangerish ending leaves many things open. Although I’m pretty certain about how thing will turn out in the second book, one can only be so certain.

Like I said, Jessica Sorensen did a great job with how she wrote both her main characters, as well as the secondary ones. But here I have to note a couple of things. First, I would have loved to see a little bit more on Kayden’s dad, seeing how a major part he played in this story along with a couple more of the secondary characters. Seth, Callie’s best friend as well as Luke, Kayden’s best friend, are the only of the secondary characters who get their fair share of character development, but still, there are many things about them still to be said and explored, especially, since they both, seem to have their own traumatic past. And here comes my second note. I thought that it was a little bit too much, that so many characters in this story have such problematic pasts. Surely, life isn’t all sweet and easy, but still, we have 4 characters that occupy the better part of the book that have lived through hell. Not that this can’t happen, but still, I thought it was a little bit too much. Not that this fact bothered me or made me enjoy this story less, but I couldn’t help but noticing it.

Other than that, the pace of the story is great, at least one that I enjoyed, and I loved seeing both Callie and Kayden overcome their personal fears and fall in love. Of course I would have preferred for the story to not end in that way, but hey, who knows what Jessica Sorensen has in store for book two?

All in all, The Coincidence of Callie and Kayden is a story I couldn’t put down no matter what and I enjoyed every minute of it. Thankfully, I won’t have to wait too long for book two to be released!