EARLY REVIEW: A Most Scandalous Proposal by Ashlyn Macnamara

A Most Scandalous Proposal by Ashlyn Macnamara 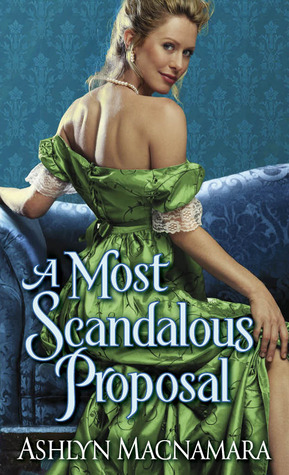 In Ashlyn Macnamara’s stunning romance debut—perfect for fans of Julia Quinn, Eloisa James, and Sabrina Jeffries—two childhood friends in Regency England discover love with the most unlikely of partners: each other.

After watching her beloved sister Sophia pine over the ton’s Golden Boy for years, Miss Julia St. Claire has foresworn love and put herself firmly on the shelf. Unfortunately, her social-climbing mother and debt-ridden father have other ideas, and jump at the chance to marry Julia off to the newly-named Earl of Clivesden…the man of Sophia’s dreams.

Since resigning his Cavalry commission, Benedict Revelstoke has spent his time in London avoiding the marriage mart. But when he discovers that the Earl of Clivesden has set Julia in his sights, Benedict tries to protect his childhood best friend from the man’s advances—only to discover more than friendship driving his desire to defend her. He surprises them both with the force of his feelings, but when she refuses him and her father announces her betrothal, he fears he’s lost her forever—until Julia approaches him with a shocking scheme that will ruin her for all respectable society…

…and lead them into an exquisite world of forbidden pleasures.


A Most Scandalous Proposal is one of those books that makes it incredibly difficult for me both to review but especially to rate it. It's one of those books with which I had quite a few problems but for some reason I kept reading until the end. And not only that, but despite its many flaws, I still enjoyed it more than I did other, technically better books.

First of all I have to note that Ashlyn Macnamara is a rather promising author. Surely, her writing is far from flawless but still it's full of potential and you get glimpses there that she can definitely do better than that. I mean let's face it, A Most Scandalous Proposal's biggest problem for me is the fact that it was too ambitious. Macnamara didn't want to tell the story of just one couple in this book but she ventured to tell us additionally the story of yet another couple along with the main one the summary promises. Much like in Sense and Sensibility by Jane Austen (a book this one shares a few similarities with, if not in the actual plot then in its spirit), Ashlyn Macnamara tells simultaneously the story of two sisters and their respective love interests. But Macnamara is no Austen. It's not an easy task to tell equally good and develop so well 4 main characters instead of two. It's not something one can't do, but it's difficult nonetheless. It's a whole other thing to have some well developed secondary characters, and a whole other to try and explore the secondary characters at the same depth as your main ones. And that is where Ashlyn Macnamara failed for me. There wasn't a balance between her two stories. And not that there wasn't a balance, but the story of Julia's sister managed to be more interesting instead of Julia's. You see where is the problem?

Soon after I started reading this book, I found myself more interested in Sophia's story (Julia's sister) and I couldn't care less about Julia herself. Especially at the first part of the book, I felt that the focus of the story was on Sophia rather than on Julia. Julia's character even though was better written in the beginning of the book, and Sophia was portrayed as a naive girl, by the end, all that had changed. Sophia really grew throughout the whole story and became more mature, whereas Julia herself was "colorless". The reason why she didn't want a marriage of love, was of minimum importance, to put it mildly. It wasn't believable or realistic. It almost felt that Macnamara wanted her character to have a reluctance towards love, but didn't know how to handle it, so she just put there the first reason that came to her mind.

Revelstoke on the other hand was again, a "colorless" character. A character without personality sort to speak. Whereas Highgate, Sophia's love interest, was a far more interesting character and maybe, the best thing about this book. He was intriguing and just perfect. And you can see clearly here, why I had some major problems with this book. The lines between main and secondary characters weren't just blurred. There were no lines, no balance. And the feeling I kept having that I was reading a retelling (or rather a story inspired) of Sense and Sensibility didn't help matters either.

All in all, A Most Scandalous Proposal is a promising debut, even if flawed. There's definitely potential there and even if I didn't really enjoy this book as much as I expected, still, I really want to see more of Ashlyn Macnamara's work in the future.

*This ARC was provided for review from the publisher