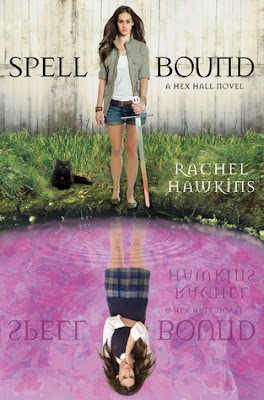 Oh well, what can I possibly say about Spell Bound, the one book this year that I'm positively dreading to write its review (I'm trying to make up my mind about it and decide to finally write this review for over a month now...)

If you read my reviews of the previous two books in this series you'll know that I absolutely loved them! I just loved everything about the story, the characters and the writing style. Sentiments I still maintained towards this series, up to the last two chapters of Spell Bound. Because until then, I adored it, I couldn't put it down and I read it in almost one sitting. I naively thought that since all the elements I so loved in the previous books in this series, the funny and humorous writing style, the sarcastic dialogues, the non stop action and the toe curling romance, were present in the final installment, that my opinion of this book wouldn't change. And like I said, I believed that, until I reached the final chapters that to put it mildly were a total disaster... Why oh why, should you do this to us Ms Hawkins???

Like I said, I devoured Spell Bound. I can safely say that in some departments I enjoyed this one even more so than the previous two books. The action was non stop and things kept happening the whole time. After all it's a rather short book and it was the last one in the series, so there were many things to be wrapped up. So the non stop action thing was rather natural. So, when you literally devour a book, you kind of brush off some things that when you think of later, you understand that you shouldn't. And now that I take a look at my notes once more, I understand that some of my problems with Spell Bound were there, before the events of the final chapters that just made my jaw drop.

Because you see, the whole book, is a nicely masked attempt to wrap up everything neatly and quickly and just move on. Answers we waited for two years now were just thrown in our faces, and disturbing truths about Sophie and her heritage were just accepted without a bat of an eyelash. Now that I think about everything again, all the loose ends, everything, was just given a brief explanation without having much of a consequence for the protagonists. I don't know if a spin off series is coming or not. I think it does, but either way, I'm just tired of authors wrapping up in a haste their current work and make it a bridge for their new one. I saw it with Richelle Mead, with Karen Marie Moning and with many others and I'm just tired.

I won't say much about the writing style. It's amazing and like I've said before, I just love all the witty and sarcastic dialogues (although I think Rachel Hawkins overdid it a bit in Spell Bound and as a result Sophie was sarcastic the whole time and in situations she really shouldn't). The character development was pretty good, although I have to point here, that all the new characters that were introduced were underdeveloped. They were just there to be introduced to us. Nothing more. So, the character development aspect in this book, suffers. A lot.

All in all, Spell Bound was a bit of a disappointment for me. It was one of the books I highly anticipated this year only to realise that it was sacrificed and became a bridge for the author's future work and not the amazing conclusion it had every right to be. The ending especially was so disappointing, everything wrapped up so quickly that it was anticlimactic. And the death at the end... I just won't say anything about it. There was no need for the character to die, or at least I couldn't see one. He just died to make everything a bit more dramatic and easy. That's how it came across at least.