REVIEW: The Pleasures of Winter by Evie Hunter

The Pleasures of Winter by Evie Hunter 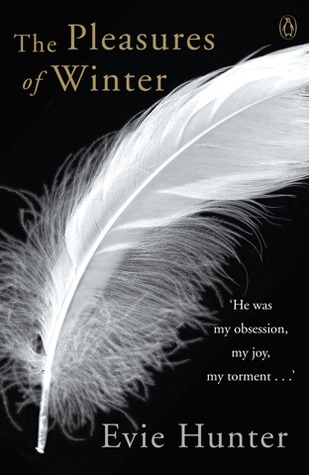 When reporter Abbie Marshall needs to escape Honduras, a private jet carrying a Hollywood A-lister is her only way out. She has a ride home with Irish actor Jack Winter - notorious womanizer and all round bad boy. Abbie is shaken to the core by Winter's blazing beauty and provocative mind.

After the plane's nose-dive into the remote rainforest forces them to fight for survival, Abbie catches tantalizing glimpses of the complicated man behind the image. And the more she sees of him, the more he touches some primal part of her that she is determined to suppress. But after a devastating encounter with Winter's shadow side, Abbie's detachment is shattered.

On returning to normal life, Abbie cannot forget what happened, nor ignore the shocking rumours about the star's private life. Her struggle to make sense of her torment leads straight back to Winter, who is just as obsessed by her. But if they are to have a relationship, Abbie knows she must embrace his hidden desires ... and accept her own.

No longer caring about anything but their intoxicating love affair, Abbie is drawn deeper into the dark heart of Winter - and the secret that threatens to destroy everything ...

With all the craziness that 50 Shades has created recently and after seeing one erotica, BDSM themed, story being published after the other, I had made a promise to myself that I would try to stay away from it all. Since 50 Shades weren't really one of my favorite books and not for its story but for the writing style, it was only natural for me to stay away from anything that is promoted to be the next 50 Shades, only better. To be honest with myself, I was tempted more than a few times by some titles but always managed to stir away from temptation. But, with The Pleasures of Winter, I just couldn't resist. Even if deep down I knew that I shouldn't try it, that premise made me break my promise and pick up this book. Now I read it, I think that promises are made for a reason and next time, I'd do well to not break them...

The Pleasures of Winter, is indeed a book fans of 50 would really enjoy and like some other reviewers said, better written. And I can't agree more about either of those facts. Pleasures of Winter follows the exact same pattern with 50 (with spankings, obsessive heroes and the like), only the writing style is so much better, with actual plot in the story and there's not a moment you want to smack your head on any available surface due to repetitions or the appearances of inner goddesses. Hands down, this book is actually written in a way that you can easily read it and there's some character development. But, despite that, it still wasn't the right book for me.

The best part of Pleasures of Winter is by far the first part of the story that is set in the jungle. The part where Abbie and Winter crash in the jungle and fight for survival is the best part of the book. I liked everything about it. Well, everything right up their last day in the jungle that is and the first real hint of Winter's sexual appetites. Up until Winter "punished" Abbie for disobeying him I was sure that this would be an erotica title that I would love. After that, I felt uneasy towards Winter but still had hopes that he would somehow redeem himself, something that unfortunately never happened.

Maybe, BDSM themed stories are not for me. I don't know. Most of the stories with that theme that I read, were certainly not for me, but, there are a few that I really liked, so probably, it's not the theme that I don't like, but the way the hero or heroine is portrayed. And although Abbie was a nice character, well written and even if submissive in bed not a pushover, Winter was, for lack of a better description a real jerk. I didn't like Pleasures not because of the BDSM theme, not because of the writing style, not even because of the fact that it's a story already been written and said but because of the main hero, who I just couldn't picture him as sexy and caring no matter how hard I tried. The way he treated Abbie was horrific. I mean, I get the whole spanking idea, BUT only if both participants are okay with it all. How would you call a man who just starts spanking you just because you disobeyed him and it's not in the middle of a sexual act you both agree to, or you don't even know that this is the way he's turned on? Winter just starts spanking Abbie while she has no kind of relationship with him, she doesn't know a thing about him and they're not even in the middle of a sexual game. Because in my world, that screams abusive. It's a whole other thing to consent to something and a whole other to just get thrown in the middle of it with no prior knowledge. Who cares if Abbie is turned of in the end by the spanking? I don't. I was so repulsed with the whole scenario that from that point on, nothing Winter did could be perceived as sexy from me. And to make matters worst, he keeps treating Abbie badly and I'm not talking about while exploring her submissive side. Somewhere in the end of the story, Abbie and Winter break up and Winter's attempt to make up to her and take Abbie back is only saying that he's sorry (I think I'm not 100% certain about the sorry part), not giving any explanation whatsoever for his behavior and when Abbie isn't responding the way he'd liked he threatens her with punishment for not being obedient on the spot. I mean come on!!!! Is that even remotely sexy??? Is something wrong with me that I can't see it as sexy?

*This title was provided for review from the publisher.
Posted by Unknown at 18:45