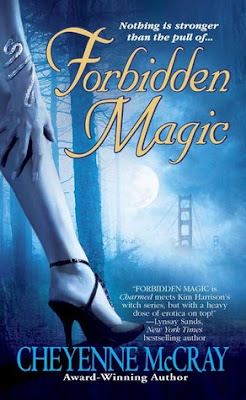 Cheyenne McCray's paranormal romances seduce with an award-winning combination of heat and fantasy. Now, she weaves the first tale in an enthralling new series sizzling with dark magic and dangerous desires. Prepare to be spellbound by Forbidden Magic...

D'Anu witch Silver Ashcroft knows she walks a perilous line by practicing gray magic. But it's the only way to protect herself from the evil that surrounds her. After the horrors she has witnessed, Silver thinks she is ready for anything...until the most intensely arousing being she has ever encountered swiftly--and sensuously--proves her wrong...

Hawk is a Tuatha D'Danann warrior--powerful beings descended from the Fae. And for him duty has always come before pleasure. Then, clad only in moonlight, Silver Ashcroft welcomes him to her city of San Francisco and makes his blood sing with a passion beyond compare. She is the embodiment of fantasies he never knew he had, but the terrifying reality of his mission lurks in every shadow...

Only the strongest will survive the upcoming battle, and the forces of darkness are more powerful than ever. Now, warrior and witch must trust in their hearts above all else--for to claim victory, they first must claim each other...

Forbidden Magic was an utter disappointment for me I'm afraid... I have seen the mixed reviews on Goodreads, but still I thought that I should give it a try. After all, the premise sounded more than intriguing and Cheyenne McCray is a big name out there.

So, I picked it up, only to be quite certain from the very first chapters that I wouldn't like it. I just had that feeling and I knew that no matter how hard I tried, I wouldn't be able to get into this book. And I'm sad to say, that my opinion of Forbidden Magic didn't change as I kept reading. Somewhere after the middle of the book I just started reading this on the fast forward. I just skipped the various and informative sex scenes and just read whatever grabbed my attention. As it is, I don't think I missed much...

The first thing I noticed were the incredibly cheesy names... I could maybe go with Hawk (the hero has wings...) and Silver (the heroine's hair are blond) but Moondust??? Please! But the cheese doesn't stop there... The problem with Forbidden Magic is that is far too cheesy and far too predictable for me to enjoy it... There's immediate lust and even if the sex part between Hawk and Silver arrives a little bit later than what I expected, Hawk's constant hard on as soon as he laid eyes on Silver and Silver's tightening womb caused every single time Hawk moved, irked me to no end... And since I'm talking about cheesy, I can hardly refrain myself from mentioning that incredible scene were Silver and Hawk perform the ritual to call more D' Danann warriors through a perfectly nice blowjob! Nothing more powerful than that guys!

Anyway, Forbidden Magic leans more on the erotica side with paranormal elements than a paranormal romance story. There's too much sex, a bit meaningless at times, and those scenes where Junga, one of the demons, has sex in various positions and with various partners were completely unnecessary. There were at least three scenes where that Junga chick explores the submissive side of her human body and why should I care?

The plot like I said is cheesy and predictable, the character development barely there and even though the writing style is good, I'm afraid it couldn't save the whole book for me.

All in all, Forbidden Magic has received so many mixed reviews for a reason. Sadly, I find myself with those reviewers that didn't like it although I think that it's more a matter of preference. For some people to love it, it must have some qualities that I failed to notice.