REVIEW: One Night with a Hero by Laura Kaye


One Night with a Hero by Laura Kaye 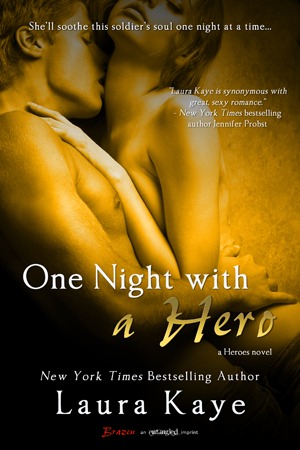 He wants just one night…

After growing up with an abusive, alcoholic father, Army Special Forces Sgt. Brady Scott vowed never to marry or have kids. Sent stateside to get his head on straight—and his anger in check—Brady’s looking for a distraction. He finds it in his beautiful new neighbor’s one-night-only offer for hot sex, but her ability to make him forget is addictive. Suddenly, Brady’s not so sure he can stay away.

…what they need is each other.

Orphaned as a child, community center director Joss Daniels swore she’d never put herself in a position to be left behind again, but she can’t deny herself one sizzling night with the sexy soldier who makes her laugh and kisses her senseless. When Joss discovers she’s pregnant, Brady’s rejection leaves her feeling abandoned. Now, they must overcome their fears before they lose the love and security they’ve found in each other, but can they let go of the past to create a future together?

As soon as I heard that there was a sequel to Her Forbidden Hero featuring Brady, I just couldn't wait to get my hands on it. You see, Laura Kaye intrigued me to no end with Brady's character,even if he appeared only shortly in Her Forbidden Hero and I was just dying to read his story.

Now that I read it, I just have to say that Laura Kaye can't disappoint with her work. Even if my feelings were a bit mixed towards certain parts of the story, in the end, I'm left with a sweet feeling, loving pretty much everything about One Night with a Hero.

First of all, let my clear what I mean by saying that I have mixed feelings towards certain parts of the story. At first, I found the pace of the story a little slow and the romantic part felt a bit rushed. You know me, when sex comes really soon in the story I rarely end up liking it. Not that I will judge a story only by that detail, but in most cases, when the sex comes before I have the chance to form any real attachment to the characters, I just can't connect with the hotness level of that said scene. And in One Night with a Hero, the first sex scene came way too quickly and as a result it was like I was just reading about two people having sex, without caring about how they felt or anything else. That first sex scene along with the next one were hot, but still, I couldn't really appreciate them.

Then, the pace of the story picked up and although it was cheesy at times, I had a great time while reading it. Only to be a bit disappointed with Brady and his behavior after a while until finally, the ending left me with a bittersweet feeling.

Yeah, One Night with a Hero was a bit of a roller coaster of a read for me. Not that I didn't like Laura Kaye's writing style, I absolutely loved it! She is one gifted writer and she made me enjoy a story that if written by any other author I don't think that I would enjoy as much.

The sex scenes are sexy and hot as hell but the character development was a bit inferior compared to the first book in the series.

Both Joss and Brady have so many emotional wounds and carry such a heavy emotional baggage that I definitely expected more in the character development department. As it is, both of them felt a little bit one-dimensional, with Joss' only highlighted aspect being her kindness while with Brady, all one could really see was his troubled past and how that affected his life. There aren't many other things the reader can say about them. And certainly, those aspects of their characters are crucial to the story, but there's more than that and I really wanted to see them. And after seeing how Kaye really can write a hero with a troubled past in the previous book, well, I kind of expected more.

But like I said in the beginning, despite not enjoying One Night with a Hero as much as I expected, I still liked it a great deal. Laura Kaye can definitely deliver in the romance department and despite some minor problems, what I remember the most about this story, aren't all those things that I somehow expected them to be better, but a cute and beautiful romantic story.

*This title was provided for review from the publisher.
Posted by Unknown at 06:00