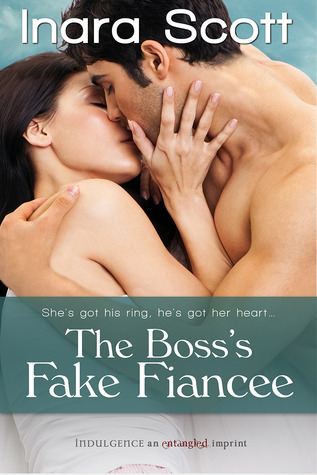 Is she his worst nightmare…

No relationships, that’s billionaire Garth Solen’s rule—especially not with a woman like his new employee Melissa Bencher, who thinks with her heart and not her head. But all bets are off when Melissa tries to make her jerk ex-boyfriend jealous by suggesting that she’s dating her gorgeous boss. How could she have imagined all the trouble one impulsive act could cause?

…or a dream come true?

To protect his ailing grandmother, Garth is forced to play the part of Melissa’s adoring fiancé. Now they’re trying on rings and posing for the paparazzi. The game is clear: for one month, they play the part of an engaged couple, and then they part ways. No emotions. No entanglements. But when it comes to matters of the heart, Melissa’s never been good at following the rules…


The Boss's Fake Fiancee is soooo much better than the first book in this series Rules of Negotiation. So much better that you can't even imagine it! It sucked me from the first page and until the very last one I just couldn't put it down. It's cute and sexy and fun and a romance title that I absolutely loved.

If you read my review of Rules of Negotiation, you know that I had some problems with the characters, but the writing style was so good that I managed to like it despite the fact that I couldn't connect with the characters. Well, in The Boss's Fake Fiancee, imagine the same exceptional writing style, but with characters I couldn't help but fall in love with. Both Melissa and Garth are characters I loved reading about, that I could connect with and care for them, something that I couldn't feel with Brit and Tori. And now that I think about it, Brit, my main problem in the first book, remains a character that I can't really like. I mean, as Melissa's older brother he was a secondary character in this one, and everytime he made his appearance I kind of remembered why I couldn't like him before.

Anyway, The Boss's Fake Fiancee is the story of Melissa, Brit's little sister and Garth a super smart billionaire and her boss, who are trapped in a fake marriage scenario that sooner rather than later becomes true. Well, I'm a sucker for the forced marriage of fake marriage trope and no matter how many stories like that I read, if they are well written, I can't resist but fall in love with them. And this one, is an exceptionally written one. It's not a long story but the character development is amazing, and even if the plot follows all the cliches of such stories, it still manages to stand out and be memorable. Mainly, because of the main couple. Melissa is the kind of female heroine I like reading about, caring and compassionate and I loved seeing her taking her life into her hands and putting both her mother and Brit in their place and demanding that they both stop judging her and her decisions. The scene with the wedding gowns was just precious!

Brit on the other hand was the challenge in this novel. Writing his character was the most difficult part of this novel in my opinion and the part where I appreciated Inara Scott all the most. The way she handled him and presented him was just perfect. Granted, I understood really soon what was the deal with him, but even so, his character was well researched and believable. I won't say anything more, I hate spoilers, but thumbs up to the author for writing him. He was my favorite part of the story.

All in all, The Boss's Fake Fiancee is a rather typical romantic story, that manages to stand out due to its characters and the author's incredible writing style. There's not a single moment you'll feel bored while reading it and I can't help but recommend it to all fans of romance. It's quick and cute and sexy. What are you waiting for?

* This title was provided for review from the publisher