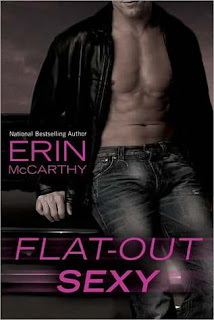 Independent single mother Tamara Briggs wanted to find a new, sexy, no-strings-attached man-just not one as young as NASCAR driver Elec Monroe. But he sure does get her heart racing. And after she’s tricked into a blind date with him, Tamara gives in to her passion. Things screech to a halt, though, when he asks to meet her children. Whatever happened to wham-bam-thank-you ma’am? Suddenly Tamara has to decide how much risk she’s willing to take to experience the power of true love.


I can't even begin describing in how many ways I was disappointed with Flat Out Sexy.... Really, after all those raving reviews, I find myself once more in the minority of readers, but honestly, I struggled to finish this one.

I will start with the things I liked about Flat Out Sexy. And that is just one: the writing style and consequently the sex scenes. I may sound really harsh, and believe me I hate it, but this book is nothing more that some really well written sex scenes. And when I say well written, I mean it. But to be honest, I can't like a book in its entirety just for the good sex scenes. Because even a good sex scene, when there's absolutely no story to back it up, seem bad. Well, not bad precisely, just boring.... Because after a point I just felt like the whole book was just an excuse for Tamara and Elec to jump to bed and entertain us. And that was okay for the first and second sex scene, but after that I was just bored. I had already read about their sexual exercises and 5 or 10 more wouldn't change a thing. The story that was needed to keep me interested, was just not there.

And that was my main problem. The lack of even a substantial storyline... The story of Flat - Out Sexy was so full of cliches, so full of cheesiness that even the best written sex scenes in the world couldn't keep me interested. Not when all that happened where Tamara and Elec jumping each other whenever and wherever they could without caring if it was appropriate or if others knew exactly what they did. And I get it, they were so in love that they jumped to action straight away, only how could I possibly believe that they managed to fall deeply in love from the two or three times they had met???? So, we're talking about lust here. Which is just fine. Only, both of them were supposed to be decent, so even if their friends eventually knew about their sexual life, going about it like rabbits during a dinner was a bit too much to stomach. But my problem wasn't their decency. I couldn't care less about it. I just mention those incidents in order to highlight further the exact point where I knew I would struggle to finish this book... And that was when Elec, after two sex sessions with Tamara, and when I talk about sex sessions I mean just that and little talk, they were not even dates, starts feeling oh so in love with her and wants to adopt her children or whatsoever since he can't have children of his own. Oh, and he's 25 years old. Really??? I don't know about you, but I don't think that most people his age have those kind of thoughts and act on them so quickly. And I can't stress the word quickly enough... So, combining those two incidents, the so in love sex whenever and wherever and the thoughts of caring for another's family after only a week Elec and Tamara know each other, and well, you get why I just found everything about this story quite unrealistic...

Anyway, Flat - Out Sexy was just not the book for me. Probably I once more missed all the hidden pleasures of a book so many others enjoyed, but to be honest I just skimmed through most of the sex scenes of the second half of the story. Even if well written, they didn't add up anything to the story. The characters were good, not as much developed as I would like and apart from a couple of funny scenes with Tamara's children, there's not much I will remember about this book. Coming to think of it, Hunter and Petey - Tamara's children - where the only thing I loved about this book from the beginning to the end. Especially Petey and his smart mouth, a kid who only spoke when he thought it was necessary and to deliver at the same time some amazing lines!

All in all, I'm sad to say it, but I can't recommend this book to anyone. Even if the sex scenes are great. It was just not the right book for me. It may be the right one for you though, since it's a rather popular book, I just can't bring myself to recommend it.