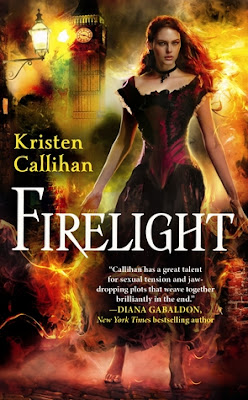 Miranda Ellis is a woman tormented. Plagued since birth by a strange and powerful gift, she has spent her entire life struggling to control her exceptional abilities. Yet one innocent but irreversible mistake has left her family's fortune decimated and forced her to wed London's most nefarious nobleman.

Lord Benjamin Archer is no ordinary man. Doomed to hide his disfigured face behind masks, Archer knows it's selfish to take Miranda as his bride. Yet he can't help being drawn to the flame-haired beauty whose touch sparks a passion he hasn't felt in a lifetime. When Archer is accused of a series of gruesome murders, he gives in to the beastly nature he has fought so hard to hide from the world. But the curse that haunts him cannot be denied. Now, to save his soul, Miranda will enter a world of dark magic and darker intrigue. For only she can see the man hiding behind the mask.


I picked up Firelight, having more than high expectations from this book. Many trusted friends and reviewers loved it, so I started reading it feeling certain that I would fall in love with it. And once more, having high expectations from a book, did more harm than good to a book... Because I may enjoyed reading Firelight, but I didn't exactly fall in love with it...

First of all, I have to say that the way Kristen Callihan wove into her historical setting some paranormal elements, was my favorite part of the book. I love historical romances as well as paranormal ones, so having both those elements in a single book was perfect for me. And what was even better, is the fact that Callihan actually managed to pull of the coexistence of those elements in a spectacular way. And Callihan proved how good an author she is not only by that fact, but from the way she presented and developed her characters as well as from her intricate world building. So as far as the writing style is concerned, I loved pretty much everything.

Where my main problem with Firelight was though, is the romantic department. I'm not a big fan of instant love especially in adult novels. So, I just couldn't understand how Miranda especially, fell so quickly and so deeply in love with Archer. I could see why Archer was intrigued by Miranda and set his eyes on her, but I didn't expect that Miranda would so easily love him and be prepared to do everything for him. One would expect that a woman forced to marry someone would look him in a more suspicious way than Miranda did. As things were, Archer only had to talk about a couple of interesting topics and voila, he had Miranda's everlasting affections.

So, since I couldn't come to terms with the way Miranda and Archer's love bloomed, it is only natural that I cared little about how their love developed. Surely, I wanted them to have their HEA, but I wasn't dying to see them get to it. I just kind of read their story, not really investing in their emotions. Maybe this is a little harsh judgement, but again, I had so high expectations, that I just wanted something more. Because the potential was all there.

Apart from the romantic department, I liked pretty much everything else about Firelight. The writing style as well as the plot and character development were incredible, even though there were some details about the world building that I would like to be more explored. But that's what future books are for :)

All in all, Firelight is a great book, one that HR lovers out there should definitely read, but I personally think it could have been so much better. All the potential is right there.