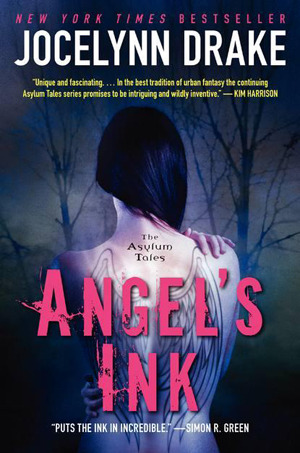 Looking for a tattoo—and maybe a little something extra: a burst of good luck, a dollop of true love, or even a hex on an ex? Head to the quiet and mysterious Gage, the best skin artist in town. Using unique potions—a blend of extraordinary ingredients and special inks—to etch the right symbol, he can fulfill any heart's desire. But in a place like Low Town, where elves, faeries, trolls, werewolves, and vampires happily walk among humanity, everything has its price.

No one knows that better than Gage. Turning his back on his own kind, he left the magical Ivory Tower where cruel witches and warlocks rule, a decision that cost him the right to practice magic. And if he disobeys, his punishment—execution—will be swift.

Though he's tried to fly under the radar, Gage can't hide from powerful warlocks who want him dead—or the secrets of his own past. But with the help of his friends, Trixie, a gorgeous elf who hides her true identity, and a hulking troll named Bronx, Gage might just make it through this enchanted world alive.


It doesn't come as a big surprise that I absolutely loved Angel's Ink. Whoever is familiar with Jocelynn Drake's work and her ability to create intricate and unique worlds knows exactly what I'm talking about and why I couldn't help but thoroughly enjoy Drake's newest release. She's simply one of those authors that just sweep you away into a magical journey you never want it to end.

But let's take things from the start. The first thing I really loved about Angel's Ink and found really refreshing was the male POV. I kind of take for granted that the voice I will hear in my head telling the story will be female that I was pleasantly surprised to realize that this time I would hear a man telling me his story. I know the blurb clearly states the POV but believe it or not I haven't even read the blurb before picking up this title. It was a book written by Jocelynn Drake, I didn't need any other recommendations... So, the male POV was such a fresh take on the genre, at least for me. I know this one isn't the first story told in male POV, but I seem to just keep picking all those that are told from a female one.

Gage's voice was strong and sexy and reading about his growing feelings for Trixie and how their romance developed was hotter than what I could have ever imagined and sweet at the same time.

The world building is something new and intricate. In fact the world building is so complicated that I kind of struggled to understand how everything works. And to be honest, even now that I have finished reading Angel's Ink I still haven't understood how everything falls in place in this world. You have humans and almost every paranormal creature you can imagine (warlocks, fae, elves, werewolves, trolls), all living together in modern society. The details of the world are slowly given to the reader along with the narration but up to the end, it's not quite clear how everything works or connects in the story. At least I fell that way. At points, everything was just too much and the actual story was lost in the details of such an intricate world.

The character development is pretty good, although it's mainly focused on Gage. We only learn about him and little else about the rest of the characters. And that was the reason I felt a little bit tired sometime after I reached the middle of the book. I was a bit tired about Gage's endless list of problems and fires he needed to put out. He was constantly running from someone to save his life or he was in the middle of trying to fix someone else's life in cost of his own.

The romance between Gage and Trixie was sweet and sexy at the same time and I really enjoyed reading that part of the book. Plus, the ending just blew me away. Although from an aspect it felt a bit anticlimatic, some details revealed at the end of the book just made sure that I would be definitely reading the next installment in this series.

All in all, Angel's Ink is a fresh UF story that all lovers of the genre should try reading. It may be weak in some aspects but Jocelynn Drake makes sure that you'll have a great time while reading her stories, even if you have some minor problems.

* This title was provided for review through Edelweiss
Posted by Unknown at 15:49