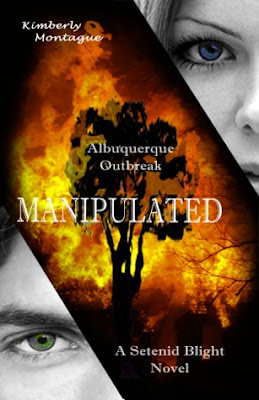 While this novel is set in the Setenid Blight world, it can be read as a stand-alone novel since no prior knowledge is required to enjoy it.

Two months ago, high school senior, Risa Neely had it all going for her: good friends, a good education, and a supportive mother. But all that changed the night her new stepfather attacked her. When her friends and even her own mother believe her stepfather's twisted lies, she has no other alternative but to turn to her absentee father.

Just when she thinks she's been able to move on and carve out a very safe, albeit lonely existence, bad-boy Brodie Decker, the school's hottest man-whore, literally knocks her off her feet. Drawn to the way she's completely unimpressed by him, Brodie knows she hides herself behind a mask and is determined to get underneath it. But he's blindsided by the connection they feel for each other.

Can Brodie accept Risa as a permanent fixture in his life? Can Risa trust Brodie enough to tell him her awful secrets? And will their connection be enough to hold them together when their friends, family members, and entire city are pulled under a deadly Setenid Blight quarantine?

Recommended for ages 15&up.


Kimberly Montague truly astonished me with her YA series! I mean I had read in the past her adult novel Until the Morning Sun, so I was already familiar with her writing style and I kind of knew what this author is capable of, but still, I think that YA is her strong point.

Manipulated is the third novel in her Setenid Blight series and even if I hadn't read the previous two books in the series, as Kimberly says, it can be read as a stand alone. I didn't feel lost at any point in her narration, the world building and the details of the whole setting were given in a way that helped me follow the story and slowly get into everything. I can't really say if I missed anything not having read this series in its order, except maybe the fact that I now really want to read them just to satisfy my curiosity :P

Honestly, Kimberly Montague did an amazing job and helps her readers follow the story even if they haven't read the previous two books in the series. After all, Manipulated features a brand new couple, and characters of the previous novels only make a brief appearance, at least as far as I could tell.

Manipulated isn't your typical YA novel. It starts much like a contemporary romance title would only to change direction somewhere after the second half and become a much darker urban fantasy one. This split in the narration is what made me love so much this novel and at the same time it was my main source of problems. Funny right? Let me explain.

You see, the fact that I was expecting an Urban Fantasy novel and it started with a very contemporary romance feeling took me by surprise, a really pleasant surprise. I loved seeing Risa and Brodie get together, how their relationship evolved and most of all I liked reading about the changes in Risa herself and her relationship with her father after all the bad things that happened to her. Especially Risa's relationship with her father is maybe my favorite part of the whole book. I loved the way Montague slowly worked the details of their tenuous relationship and the misunderstandings that kept them apart.

But, like I said, Manipulated in essence is an Urban Fantasy novel and somewhere along the second half of the book, it was more than obvious where the story was heading. And I didn't mind this change, if only the transition was smoother. I kind of felt that everything exploded rather untimely or maybe a little bit unexpectedly. There wasn't a balance, and from a teen romance/drama, the whole novel turned into a dystopian fight for survival. And if only that transition was smoother, I would have no problem whatsoever with that. On the contrary. But as it is, I feel like the biggest part of this book is contemporary and only a small part Urban Fantasy. There's no balance between those two genres. And as a result, vital information about the virus and how exactly that dark world operated are missing. There wasn't simply too much space for the world to unfold. It was consumed by Risa and Brodie's love story, which I really liked, but it kind of ruined the balance of the narration.

The character development is really good, with both main and secondary characters being explored. The plot, if split in half is evenly paced. The romantic part and the action part have a pace of their own, they just don't meet each other. I really don't know if I'm making much sense :P

All in all, Manipulated is a fascinating novel, that apart from some details is a great YA story. I fell in love with Risa and Brodie and I'm looking forward to see how things will unfold in their future. And I hope that in the future instalment most of my questions will be answered. The ending left me craving for more :)

* This title was provided for review from the author
Posted by Unknown at 16:00