Just One Look by Linda Cajio 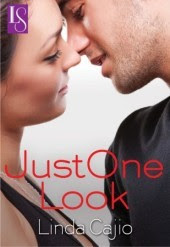 In this taut and tingling romance, two spies find themselves entangled in a deadly game—and a sweet obsession—as undercover takes on a sexy new meaning.

His orders are to follow her every move. Luckily for agent Remy St. Jacques, this assignment comes with an unexpected benefit: His mark is drop-dead gorgeous. Too bad she is a traitor, a “turned” agent now trading state secrets for money. But when the unthinkable happens, and Remy is spotted by his target, he must make a bold move: forge an intimate bond with the woman, seduce his way into her heart, and discover what she’s hiding. Only now Remy’s not so sure she’s guilty of anything—except making him fall in love with her.

Susan Kitteridge had the perfect cover as a glamorous denizen of the Washington, D.C., party circuit. But when the spy sees something she was never supposed to see, she must flee the city and plot her next move. Susan’s mind is in turmoil when a handsome stranger suddenly catches her eye. But the growing, burning heat between them just might lead them both into mortal danger.


I just have to admit that I didn't really think twice to pick Just One Look up. I just saw the cover, read the premise and I just knew that I had to read it. Huge mistake on my part... As huge was my mistake to believe that a contemporary title, first published in 1990 would be something new and fresh... I still believe that some stories or authors are timeless, but that's not the case for Just One Look I'm afraid.

As soon as I started reading this one, it was obvious that I wouldn't end up loving it. The story, no matter how interesting the premise sounds is a little bit boring and far from what I expected. Because let's face it, when you read about spies you kind of expect some action, some violence, something. Just One Look had nothing. It was just a romantic story where the protagonists happen to be something like spies (Susan is nothing like Jennifer Garner from Alias, believe me!) and there's no action, anywhere in the book. There's no action even in the sex scenes if you know what I mean... All the story, in every department, is sort of flat. I have no other word to describe it any better.

The writing style is slow, heavy on the romantic department, but the kind of romance with no spark, where the protagonists feel an immediate attraction for each other, from the very first glimpse. And I'm not a fan of that, especially in adult novels. In YA, instant love is something that may work occasionally, but I have yet to encounter an adult novel where IL worked in advantage of the story. Remy, the main hero, tried very hard to be the drool worthy alpha male, but he failed to caught my attention, and I have yet to encounter a heroine, as indifferent as Susan. It pains me to be so harsh, but nothing in Just One Look worked for me. Absolutely nothing. Well, apart from one thing: Susan's grand mother! That's the only redeeming character and quality in this story for me. As soon as she was in a scene, I knew I wouldn't be bored and thankfully, she was part of the story for the biggest part.

All in all, Just One Look is not a romantic suspense story. Far from it. It's just a romantic story set in a world that so much could happen in terms of action and suspense. It's a short story, so at least you can easily read it but as far as memorable characters and stories go, it's among those novels that I easily forget. Nothing remarkable. Whether I recommend it or not? Consider yourselves warned :)