REVIEW: Demon Hunting in the Deep South by Lexi George

Demon Hunting in the Deep South by Lexi George 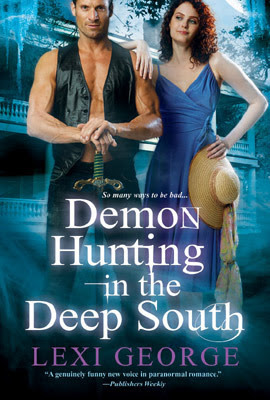 The warrior and the wallflower . . .

Shy, self-conscious Evie Douglass tries to stay under the radar, especially when her nemesis Meredith Peterson, aka The Death Starr, is anywhere around. Meredith and her bitch posse of skinny girlfriends have tormented Evie since the seventh grade, calling her names like The Whale and Thunder Thighs.

Evie tries to stay invisible, but that’s not an easy thing for a plus-sized gal to do in a small town like Hannah, Alabama. She finds it doubly hard to avoid Meredith’s wrath once she takes a job at the lumber mill. You see, Meredith’s husband is Evie’s new boss. Translation: more torture time for The Death Starr.
Evie thinks things couldn’t get much worse until the morning she finds Meredith’s bloody body sprawled across her desk. Typical Meredith, she gets herself dead mere days after a very public scene in which Meredith accuses Evie of having an affair with her husband. Worse, the murder weapon is found in Evie’s car.

Suddenly, Evie is the Number One suspect in a sensational murder case. But she’s got bigger problems. Hannah is infested with demons—soul sucking, body snatching creatures of evil—and, for some reason, they want Evie. The only thing standing between Evie and death or possible possession is a hunky blond demon slayer named Ansgar.

Ansgar is a Dalvahni warrior, a supernaturally gorgeous race whose sole purpose is to hunt down and capture rogue demons.

Evie could almost swear that Ansgar is interested in more than demons. He seems interested in her. Ridiculous, of course, because he’s sex on two legs and she’s…

To add to Evie’s troubles, Meredith doesn’t even have the decency to stay dead. She shows back up as a ghost and she’s more of a beyotch than ever. Meredith has deathnesia—she can’t remember who killed her—leaving Evie to solve the mystery herself, or go to jail for a murder she didn’t commit.

Demon Hunting in the Deep South is one of those books I find it extremely hard to review from time to time. For different reasons in most cases, but difficult nonetheless. And it's so hard for my to rate and review this one because even though I knew that it was part of a series, I was under the impression that it could be read as a stand alone just as well. But that, was a mistake.

Let me explain. Demon Hunting in the Deep South, has a different set of characters from the first book in the Demon Hunting series BUT the same characters that are now the main couple, had a rather extended presence in the first book of the series, Demon Hunting in Dixie. And when I say extended, I mean that they had so much history, that I couldn't possibly keep up with their story. There were so many things that tied Evie and Ansgar together, so many things that happened between them in the first book that no matter how many explanations the author gave me, I always felt that there were some pieces missing.

And that feeling of loss extends to the world building and plot as well. Lexi George does an amazing job with the complexity of her world but not everything is explained in detail. Or in enough detail to be able to grasp exactly how everything works. Granted, some things are explained but there are many that are not making it difficult for me not only to understand how the world ticks but to evaluate the author's ability to present her world to her readers. I simply don't know if things are left unexplained or were explained in the first book.

For example, in Demon Hunting in the Deep South you will meet a diversity of paranormal creatures: demons, fairies, ghosts and lots of magic. There are so many different paranormal elements but they don't form a solid world I'm afraid... I can't see any connection between them. They are just thrown in the story, without so much of an explanation or reason for existence. Nothing. And as I said, I don't know if those explanations I was seeking were given on the first book of the series, or not at all. SO, you see my problem in making my mind about the world building and the writing style...

Apart from that, there's one thing I immensely enjoyed about this book though: the sarcastic tone and humour of the author. Lexi George simply has a voice that stands out and knows how to write a villain who you love to hate. And that is Meredith. She may not be the main villain but she's definitely not angel material. But I loved her to pieces even when she was a total bitch. Especially when she was one :)

As far as Evie and Ansgar are concerned, there where things I liked and disliked in both of them. In Evie I liked how she developed throughout the novel and how loyal she was, but she was far too shy for my taste and honestly, the part where she gets arrested and her main concern is that she's commando, made me roll my eyes more than once.

Ansgar on the other hand, is your typical, drool-worthy alpha male, which is always a plus, I loved his brutality and how he fought his feelings for Evie, but I thought that he approached her far too easily and quickly for a man that did everything he could for Evie to forget all about him. He kind of contradicted himself.

The sex scenes, were fairly good written and sexy and you could see the chemistry between Evie and Ansgar, but again due to their history form the first book, the make out scenes came far too quickly before I could connect with the characters, and that is something I don't usually like. That, and reading sentences like "touche me there" or "touch her houhah" in the middle of a sexy scene that completely turned me off.

All in all, Demon Hunting in the Deep South is a book I had some problems with, problems that I wouldn't probably have if I had read the first book in the series. As it is, my review and rating is based solely without any previous knowledge to Lexi George's world and I really want you to take that into consideration. To fans of this series, Demon Hunting in the Deep South is a must. To the rest, take my advice and read those books in order. Lexi George's sense of humour is worth it! That, and I want you to meet Meredith :P