A Blood Seduction by Pamela Palmer 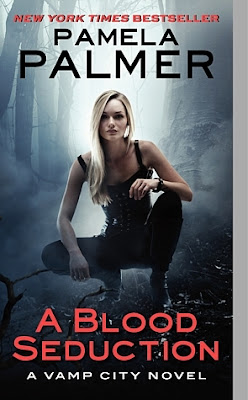 Take me down to Vampire City...

Vampires live only for lust and pleasure in the eternal twilight of Vamp City. But the city's magic is dying. The only person who can restore it? A beautiful woman from the mortal world...one who knows nothing of the power she wields.

Quinn Lennox is searching for a missing friend when she stumbles into a dark otherworld that only she can see—and finds herself at the mercy of Arturo Mazza, a dangerously handsome vampire whose wicked kiss will save her, enslave her, bewitch her, and betray her. What Arturo can't do is forget about her—any more than Quinn can control her own feelings for him. Neither one can let desire get in the way of their mission—his to save his people, hers to save herself. But there is no escape from desire in a city built for seduction, where passion flows hot and blood-red.


I started reading A Blood Seduction, feeling that this was THE book for me! That it would be so good, I wouldn't be able to put it down. And for approximately 30% of this book, it was exactly like that. Sadly, after a point, things rapidly deteriorated and I ended up with a book I couldn't wait to finish and one I didn't like at all I'm afraid...

As I said, A Blood Seduction started with everything I search for in a book. Interesting and fresh world building, a hot hero and a heroine determined to do whatever she can to save herself and those she cares for. Add to that a decent writing style, so you get why I was so amazed at first and certain that I would love this book. But, despite all the potential and all the things that I liked, A Blood Seduction failed to deliver everything that it promised to.

I can't pinpoint exactly when things started to go downhill, probably during the make out sessions between Quinn and Arturo, the main couple. But still, although I didn't like neither how quickly they started lusting after each other nor I found sexy their make-out sessions, I still had hope. Because you see, the world building was truly good. You don't get your typical vampires, not at all. The vampires in A Blood Seduction are ruthless, blood-thirsty and treat humans like food. They not only feed with blood but through human emotions as well. Emotions such as pain or fear. You get the picture right? As I said, the vampires in this world, are exactly like vampires should be, the mythical creature people are afraid of. But not only that. In this world, we also have magic. A magic that permits those vampires to live in a parallel to ours universe and come and go between those two dimensions as they please. Intrigued enough? I was at least. Intrigued and fascinated.

But, as the story progressed, things just became to much. Pamela Palmer chose to wove to many elements in her story, and instead of making it more unique and fascinating, it just became unecessarily complicated and without any sense. As the story progressed, it reminded me of many different books. At first, it reminded me a bit of Halfway to the Grave what with Quinn tied to a bed and a hot vampire interrogating her when the protagonists first meet. Then, I was reminded of Spartacus the TV show and of Hunger Games. And in the way Arturo spoke to Quinn's mind in dangerous times, I couldn't help but think New Moon and Edward. So much for creativity... Or maybe, the fault lies with the many elements that were forced to coexist in a single story...

As far as the characters are concerned, all I can say is that I couldn't invest to any of them. Quinn and Arturo's relationship seemed forced, forced to be as sexy as it could get, but what I got instead was a man who tried to force himself in a subtle way and a woman who didn't know what she wanted. And how sexy can that be? I mean one moment Quinn feels like she's being raped and instead of protesting immediately she enjoys a bit and then protests. Granted, Pamela Palmer knows how to write a sexy scene but for a scene to come off as sexy the reader should be able to care or understand the heroes. And I could do neither of those things. Quinn was a bit irritating but for the better part of the book I didn't care for her and Arturo was a character that I forgot about as soon as I closed this book. Or maybe I remember something about him... That at first he reminded me of my beloved Bones. But only at first. What with the scene with the bed as I said above and the way he behaved, I was reminded of Bones, but he wasn't half as good a character as Bones is I'm afraid.

Anyway, A Blood Seduction, had all the potential to be one of my favorite books ever, but it failed to deliver in every department. I don't know how best to put it. And I'm so sad about it, because I really wanted to like it a lot more.