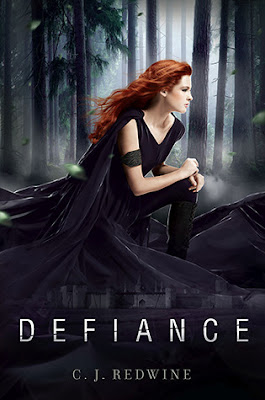 Within the walls of Baalboden, beneath the shadow of the city’s brutal leader, Rachel Adams has a secret. While other girls sew dresses, host dinner parties, and obey their male Protectors, Rachel knows how to survive in the wilderness and deftly wield a sword. When her father, Jared, fails to return from a courier mission and is declared dead, the Commander assigns Rachel a new Protector, her father’s apprentice, Logan—the same boy Rachel declared her love for two years ago, and the same boy who handed her heart right back to her. Left with nothing but fierce belief in her father’s survival, Rachel decides to escape and find him herself. But treason against the Commander carries a heavy price, and what awaits her in the Wasteland could destroy her.

At nineteen, Logan McEntire is many things. Orphan. Outcast. Inventor. As apprentice to the city’s top courier, Logan is focused on learning his trade so he can escape the tyranny of Baalboden. But his plan never included being responsible for his mentor’s impulsive daughter. Logan is determined to protect her, but when his escape plan goes wrong and Rachel pays the price, he realizes he has more at stake than disappointing Jared.

As Rachel and Logan battle their way through the Wasteland, stalked by a monster that can’t be killed and an army of assassins out for blood, they discover romance, heartbreak, and a truth that will incite a war decades in the making.


Defiance is the kind of book that is right up my alley. There's intrigue in it, a feisty and smart heroine, a compassionate hero, intricate world building, action and in overall a story that I would normally fall head over heels for. But, even though I really enjoyed reading Defiance, I can't say that I fell in love with it as well.

Let's start with what I liked about this book. And there are many, believe me. First of all, I really liked the heroine, Rachel.She was smart, independent, caring and rebellious, not taking for granted things people older than her took. I liked pretty much everything about her, even when she was bullheaded and acted in a way that jeopardised everything and everyone. Her behavior was consistent and I loved her even more when she made mistakes. Her development throughout the whole story was among my favorite parts of Defiance.

Logan on the other hand was the perfect match for her. He was calm and logical and everything Rachel needed.

The writing style was even paced and action packed. C.J. Redwine did an amazing job with her character and story development. There was constantly something happening making it hard to put this book down. The world wasn't that unique or different from other dystopian worlds out there, but it still added something fresh and new to the genre. But, despite how much I liked the idea behind Redwine's world, my main problem with Defiance, is the world building itself. Because the one thing I didn't like about this book, was the way it was intentionally vague on some crucial parts of how the world of Baalboden exactly worked. We know that it is a post apocalyptic world, but we don't get much info on what exactly happened or how things progressed, apart from that everything happened because of the Cursed One, who we don't know exactly what kind of animal is, where it came from or why it destroyed everything. There's the Commander, the villain of the story, whose endgame isn't apparent. And that's not exactly a bad thing, but we know next to nothing about him apart from how evil he is. I kind of needed more info about the main villain of the story. Maybe all those omissions were intentional, and more things will be explained in future instalments, but as it is, I felt like something was missing throughout the whole story.

The ending was a bit anticlimactic as well, and I also wanted a bit more development for the secondary characters, who for such a long book, were there just because the story needed them. They didn't have a voice of their own in the story. All those details, spoiled the fun of a really good book in all its other aspects.

All in all, Defiance is a story I truly enjoyed despite my minor problems with it and one I recommend to lovers of YA dystopian novels. It is totally worth your time and something tells me that the next book in this series will be even better.

*This title was provided for review from Edelweiss