REVIEW: The Madness of Lord Ian Mackenzie by Jennifer Ashley


The Madness of Lord Ian Mackenzie by Jennifer Ashley 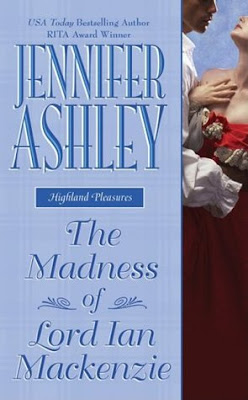 The year is 1881. Meet the Mackenzie family--rich, powerful, dangerous, eccentric. A lady couldn't be seen with them without ruin. Rumors surround them--of tragic violence, of their mistresses, of their dark appetites, of scandals that set England and Scotland abuzz.

The youngest brother, Ian, known as the Mad Mackenzie, spent most of his young life in an asylum, and everyone agrees he is decidedly odd. He's also hard and handsome and has a penchant for Ming pottery and beautiful women.

Beth Ackerley, widow, has recently come into a fortune. She has decided that she wants no more drama in her life. She was raised in drama--an alcoholic father who drove them into the workhouse, a frail mother she had to nurse until her death, a fussy old lady she became constant companion to. No, she wants to take her money and find peace, to travel, to learn art, to sit back and fondly remember her brief but happy marriage to her late husband.

And then Ian Mackenzie decides he wants her.


I picked up The Madness of Lord Ian Mackenzie expecting something brilliant. I mean, many friends recommended this book to me again and again and if you combine to this all those raving reviews one can say that I had really high expectations for this book. Not that it isn't a good book, far from it. It's an amazing book, just not that great as what I expected and definitely not my favorite historical romance out there.

Having said that, The Madness of Lord Ian Mackenzie is a really interesting story but it felt kind of slow at times. The writing style is really good, but I found the pace a bit uneven. There were times I couldn't put this book down and times I wished it would end anytime soon. The middle especially was really slow and felt that it dragged on and on... The last part was what saved the day and the first, well, it was interesting but nothing extraordinary.

Ian, the main hero, is the best attribute of this story and why I will remember it for a long time. He's an intriguing character, like no one I have ever read. He's undoubtedly an alpha male, but he's acting like a child, a really traumatized child throughout the whole book. Stating it that way, it may sound like Ian isn't that great a character after all.. But believe me, the way Ashley combined raw masculinity with a traumatized soul to sketch him is just brilliant. He acts exactly how a man would if he suffered in his childhood the horrors Ian did. Just take my word on this: read this book just to meet Ian! He totally deserves it :)

The main heroine though on the other hand, Beth, though a good character is nothing memorable I'm afraid. She's a sweet character and a nice one to read about, but nothing extraordinary about her. Nothing at all. The way the romance between them unfolds, is the other problematic area for me. I just didn't feel the spark between them, at least not for the best part of the book. By the end things had changed a bit, but the thing is, that as far as hot couples go, Beth and Ian aren't on my top 5, not even on my top 10 choices.

All in all, The Madness of Lord Ian Mackenzie is a really interesting story in overall, a well written one, but not the mind - blowing book I was expecting. Maybe if I had picked this book having no expectations whatsoever my opinion would be different, but as it is, it's one of those stories I liked, but I'm not crazy about it.It's definitely worth your time though :)