Her Forbidden Hero by Laura Kaye 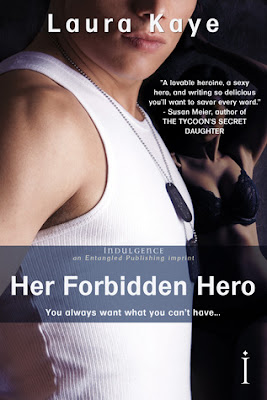 When Alyssa takes a job at the bar where Marco works, her carefree smiles wreak havoc on his resolve to bury his feelings. How can he protect her when he can't stop thinking about her in his bed? But Alyssa's not looking for protection—not anymore. Now that she's back in his life, she’s determined to heal her forbidden hero, one touch at a time...


This is the first book by Laura Kaye I read, and now I can safely say that I fully understand all those people who praise and love her work. Her Forbidden Hero was simply amazing!

This is the story of Marco, a soldier who gets back from war seriously injured both physically and emotionally and Alyssa, the sister of the man who Marco owns his life and his best friend. The two of them meet each other again after a couple of years, in a bad moment for both of them when they each struggle to overcome different problems and together they try to help each other while fighting their mutual feelings for each other.

As far as romantic stories go, Her Forbidden Hero follows the same pattern such stories usually do. Friends turn to lovers while they both have a more or less dark past. Throw in the mix the fact that Alyssa is Marco's best friend's little sister and we have Marco's instant reluctance to show his feelings just to keep our protagonists apart longer than it should.

So, the plot isn't something unique. What is unique though is the way Laura Kaye portrays both her heroes and especially Marco. That's what made the difference for me in this story, and transformed it from something typical, to something I will remember. And that is what I search in most of the stories I read. A certain quality that distinguishes them from all the rest. And Her Forbidden Hero finds that quality in the way Laura Kaye develops her characters.

The author gave great emphasis to her characters in this story, and that is evident not only from the way she presented her main couple but from the way she portrayed all her secondary characters as well. For such a short story, only 150 pages, Kaye manages to make every single character in this story stand out. The way she describes the relationship between the stuff of Whiskey's made me remember my days of working as a waitress with such fondness that I wished I was part of Whiskey's myself. Each one of the stuff (because mostly those are the secondary characters) even if he/she didn't have a significant part in the story was a complete character with his/her own voice. And well built secondary characters, screams good author to me!

But the best and most complex character in this book, let's face it, it's Marco. Alyssa may be a good character, good natured, brave and willing to sacrifice herself for those she loves, but Marco is simply amazing. The way he isn't afraid to speak of his emotions or to think about them. Most men hate to admit to themselves they are damaged in any way, but Marco, even if he is reluctant to show it to others, at least he isn't afraid to admit to himself that he's got problems. And he tries to deal with them in any way that he can. He's tortured but sweet and caring and all in all, an alpha male to drool all over :)

To sum it up, Her Forbidden Hero is a romantic title you don't want to miss. Even if it is just for Marco. My only complain is regarding to the ending. It was too cliche for my taste and for the general feeling of the whole book. But despite that, I totally recommend it.

* The title was provided for review courtesy of the publisher.