Rules of Negotiation by Inara Scott 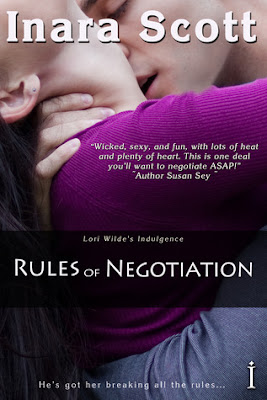 He let her make the rules…

NYC’s most eligible bachelor, Brit Bencher, is also known as The Slayer for his reputation in the boardroom…and the bedroom. And he’ll do anything to take care of his family, even seduce high-powered corporate attorney Tori Anderson in the hopes of getting her to reveal confidential information about one of her clients. But for the first time in his life, he finds he’s falling for a woman.

…and then he started to break them.

After juggling the demands of her career and the stress of caring for her ailing mother, Tori Anderson doesn’t have time for relationships—but that doesn’t mean she doesn’t want to feel like a woman. When Brit offers a no-strings attached fling, it sounds like exactly what she needs. But what will she do when Brit decides he won’t take “one night stand” for an answer? When Tori uncovers his lies, will he lose his chance with her forever?

Rules of Negotiation was a fun and really quick read that unfortunately I won't remember for long since I finished reading it. It's cute story, written by a really talented author but somehow it's not something either extraordinary or fresh. It's a story told so many times already and that is probably why I will soon forget everything about it.

In this story you have a really gorgeous and successful hero, the kind that makes all female swoon all over him and the heroine who is beautiful but doesn't even suspect it, with low self esteem, who waits that said hero to "wake" her up and make her love herself and her life. The hero's motives of flirting with the heroine are shady, heroine learns all about it but by the time they have already fallen in love so everything is fixed in paradise.

That's the story of Rules of Negotiation and honestly nothing more. I know it was obvious from the summary of the book that this would be the story, but I always expect that something is added, something that will make you remember the story, maybe the characters, or a spin in the narration, anything. Unfortunately with this book, nothing new was added. And although it was a fun and quick read, it can't really stand out among all the other books with a similar story out there.

Before I say anything else, I want to point that Inara Scott's writing style is really fresh and effective and that was what I most enjoyed in this book. The story itself of the book couldn't really grab my interest, but it was written in such a way that I wasn't bored or tired. And for a book that couldn't hold my interest, that means a lot.

The romantic plot was a bit forced for me. I mean, I didn't even have the time to adjust to the idea that Brit and Tori were lightly flirting and BOOM! they move into a whole other territory of making out. Honestly, I just had the sense that everything progressed way too quickly between them. I felt like I was a bit forced to see the attraction between them and I just couldn't see any of it.

Another thing that I didn't really like in this story was that the plot was a bit loose. From the summary, we get the idea that Brit wants something very essential for his family from Tori, and for that he seduces her. Now, should what he needed was indeed very important, I honestly wouldn't mind the way he treated Tori. But to seduce a woman, just for something like that, is unethical. Surely it's unethical on both accounts, but at least if it's a matter of life and death you can forgive someone the lengths he goes to succeed. But Brit, has no excuses. And I simply couldn't really like him after that. He kind of reminded me a spoiled kid who does anything to achieve whatever he wants.

Tori was a far kinder character, and someone I enjoyed reading about but still, their story and their romance was nothing I will remember of.

All in all, Rules of Negotiation was a light and fun read but don't expect fireworks from it. You will be disappointed. It's not exactly not worth your time, but not something to go crazy over either.