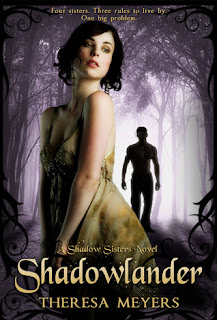 Four sisters, three rules to live by, one big problem.

Most people only believe what they can see. Gifted with the ability to see the deep, dark fae of Shadowland, Catherine Rowan Mary O'Connell would prefer not to. When the fae abduct her friend Maya, Cate breaks the sacred O'Connell Family Rules and sets a trap for the handsome fae who haunts her every step.

Cate knows she has precious little time to find Maya. By midnight, the glamour of Mid-Summer's Eve will fade, leaving her trapped forever in the Shadowland, but Maya's abductor won't give up the woman he's mesmerized easily.

The midnight hour is almost at hand. Cate must choose: her freedom or her destiny.

I was dying to read Shadowlander ever since I read that amazing premise. It kind of sounded like Fever series meets Wicked Lovely to me and to be honest I was just desperate to find my next great UF series with fae, so when I picked this novella up, I was just certain that it would be great. Only to be hugely disappointed once more...
I'm not a big fan of novellas and that is why I try to avoid them usually. I simply think that there's not enough "room" in a novella to develop enough your characters or your plot. Well, one might contradict that there are 500 pages books that seriously lack in both those aspects development, but ok, you get what I mean...
Shadowlander was just a quick read, heavy on the romance department but aside from that a read that I won't remember for long and to sum it up in a sentence: A book that I shouldn't have bothered reading.
It may have been a really quick read as I said and although the story was something I would usually enjoy I just didn't care about the characters or the story whatsoever. I found Rook creepy what with him following a girl for 16 years and Cate a bit "lukewarm" and acting in a stupid way in some cases.
The story was progressing really, really quickly that I couldn't possibly invest or care about the characters and maybe that is something to be expected by a novella but that can't change my feelings I'm afraid. The book starts with Cate having lunch with her best friend, a best friend who is acting nothing like a friend I must add, who is later kidnapped by a fae and Cate rushes to her rescue. Don't get me wrong but from the little I got to know about that best friend I got the feeling that she was a self centered person and where was the need for our heroine to jeopardise everything, her family most importantly to save her from a fate she didn't even know how bad it was? I don't know, I just couldn't get Cate's sacrifice. The next major let down was when she formed a kind of a plan to save that friend, exposed herself to that creepy fae that has been stalking her for 16 years and from one minute to next she's madly attracted to him and talking about "recharging" sex (think of sex as a form of battery for the energy sources of a fae). Just couldn't go along with it for some reason.
Anyway, there were a couple more things that made me roll my eyes while reading this novella but bottom line is, that although the premise indicates a story more than intriguing, the execution of the story spoiled things for me. Maybe I shouldn't be expecting more, cause this is a novella after all, but truthfully I don't really think that's the case. The thing is that for this to be a good story there were lots and lots of things that should be added. As it is, I feel that Shadowlander is the plan of a full book that will be written again in the future.