REVIEW: Nine Uses for an Ex-Boyfriend by Sarra Manning

Nine Uses for an Ex-Boyfriend by Sarra Manning 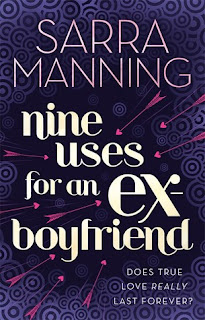 I love Sarra Manning! I just love her work, the way she writes, how she manages to make her heroes so real that you can't help but "feel" them, live through their stories. That being said, Nine Uses for an Ex-Boyfriend was one of the most difficult books for me to rate.
You see, I liked this book so much that I couldn't put it down. Literally. Manning's writing style is just amazing. Her story flows in a way that you just can't stop reading. But despite all that, for almost 90% of this book I was more than frustrated with what I was reading. I had the urge to throw my e-reader more than enough times. Talking about feeling angry towards almost every single one of the characters of this book.
Manning, handles a really delicate and a bit difficult story in this book, that of cheating, and she decided to approach it in a very civilised way for my taste. It was different. And I really appreciate that, but still, I just couldn't agree with what I was reading. Not only agree, but not even understand why...
Her heroine Hope, is in a 13 years relationship with Jack when she finds him and her best friend kissing in their own house. From then on, all hell breaks loose. I won't say what happens cause I hate spoilers, but Hope's behaviour throughout every single thing that she learns made me scream at her again and again and again.
I could totally relate to Hope.In many levels. I, myself am in a 10 years relationship with my fiance and like Hope he is the only man I've ever been in my whole life. So, I could totally understand her attempts to save that relationship. I know I would myself, even if I hated myself afterwards. But everything has its limits. And plainly, some relationships just can't be saved... So even if I could see Hope as a real person, even if I could connect with her and feel her, I couldn't understand her decisions, her obsession with marriage and how much of a victim she was. I just couldn't. And in more than enough cases I just wanted to slap her and make her see the reality of her life. I was angry at her, frustrated with her decisions and bottom line, after a point, I just ran out of excuses for the way she handled things.
Jack on the other hand is plainly horrible. And honestly, I just couldn't understand what she loved of this man. Scratch that, he's not a man. He's just a spoiled little boy who wants everything, even when he doesn't even know what that everything consists of and doesn't respect himself and the people he claims he loves. He's one of the best written horrible characters I have ever encountered. Needless to say that I just hated him. Him and Hope's best friend Susie who is a slut. And I don't use that word lightly. She's not a slut because she made advances on her best friend, although that would be enough to label her, but the way she treats Hope later just highlight how much of a slut in essence she really is.
And talking about horrible characters in this book, I just have to mention Hope's mother whose behaviour is appalling to put it mildly. I can't even consider that woman a mother who treats her child in such a way. She repeatedly degrades Hope, she blames her for things that should really comfort her and all in all is so self centreed that I can really understand the way Hope treats herself throughout the whole book. When your own mother treats you that way it's only natural that you will let other people treat you the same way if not even worse. I think that Hope's mother was the one who I was most angry with.=
As you can see, I was angry with most of the characters of this book and Hope was so much of a victim that honestly spoiled everything for me. But even so, I just couldn't put this book down. Like a drug, I kept reading the whole time, hoping that Hope will finally wake up. Only she woke up really late in the story. Really, really late.
So you see, that is why I find it hard to rate this book. I mean, I hated almost every single one of the characters, I was frustrated with what I was reading, but even so, Manning's writing style is incredible and I was glued to my e-reader the whole time. In the same way I find it difficult to make my mind on whether I should recommend this book or not. So, I'll just say that go on, read it, Manning's writing style deserves it, but be warned that you will be more than angry with what you read. Except if you feel differently than me towards cheating. Then maybe, you will feel differently about this book as well. I don't really know...