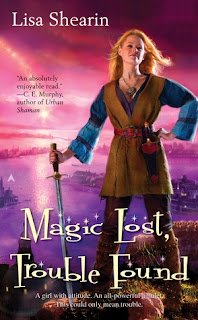 
My name is Raine Benares. I'm a seeker. The people who hire me are usually happy when I find things. But some things are better left unfound. I'm a sorceress of moderate powers, from an extended family of smugglers and thieves. With a mix of street smarts and magic spells, I can usually take care of myself. But when my friend Quentin, a not-quite-reformed thief, steals an amulet from the home of a powerful necromancer, I find myself wrapped up in more trouble than I care for. I like attention as much as the next girl, but having an army of militant goblins hunting me down is not my idea of a good time. The amulet they're after holds limitless power, derived from an ancient, soul-stealing stone. And when I take possession of the item, it takes possession of me. Now my moderate powers are increasing beyond anything I can imagine-but is the résumé enhancement worth my soul?

UGH! I picked Magic Lost, Trouble Found through some recommendations on books similar to Poison Study by Maria V. Snyder. I read the premise, found it intriguing and bought the book. Now that I read it, I really want to scream at those people who actually found it similar in any way with Snyder's books. Where did they find the similarities??? Where?
Before anything else, let me state one thing beforehand. It's not that Magic Lost, Trouble Found was a bad book. Not by any means.It was a decent Fantasy title, just not one that I would ever like. So, my rating of this book, represents solely my likeness of the book and not if it was technically a good book or not. Cause technically, this is a good book, not a 5 star rating but a 3,5 or 4. But unfortunately, I couldn't bring myself to like it or care for the story at all.
I found myself really bored by the point I reached the 1/3 of the story and after that point, I just couldn't make myself care for the characters or the story, even when it started to pick up a little after the first half. I was really tired by all those strange names the author used for her universe and the complicate relationships between the characters. Truthfully, they weren't so complicated, but when you read almost 100 pages of who is who and what is everyone doing and how even secondary characters are placed exactly in the story, well that is bound to exhaust you a bit. Well, in my case it exhausted me more than a bit and in cost to the actual story of the book.
Another thing that bothered me a bit was the fact that the story was pure fantasy, set in a completely imaginative universe with clothing of past centuries and according technology while the language was full of slang and dialogues I couldn't possibly place in the same century. The setting and the language didn't exactly blend together harmonically.
Anyway, as I said, I picked this one based on the assumption that it would resemble Snyder's work, which it didn't in any way. And it's not the book's fault that I picked it up expecting something else entirely. But I did. And if it wasn't for that, I wouldn't ever come across this title or consider reading it. Cause it's not the book I usually pick and enjoy, so it wasn't so much of a surprise that I didn't like it. But as I said, technically, it's a good fantasy title, definitely worth picking if you are a fan of the genre, just keep in mind that you'll have to ignore any recommendations that suggest it is similar to Poison Study. Cause it's not. In any way.