REVIEW: Dead, Undead or Somewhere in Between (Rhiannon's Law,#1) by J.A. Saare

Dead, Undead or Somewhere in Between by J.A. Saare 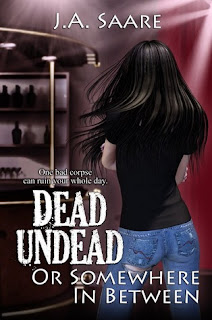 One bad corpse can ruin your whole day.

No one knows that better than Rhiannon Murphy.

She left behind the flash and sass of Miami for the no-nonsense groove of New York City, eager for a clean slate and a fresh start. A bartender by trade, a loud mouth by choice, and a necromancer by chance; she managed to keep her nifty talent hidden from those around her—until now.

The deliciously good-looking vampire, Disco, knows her secret. When he strolls into her bar to solicit help investigating the mysterious disappearances of his kind from the city, Rhiannon discovers he’s not the kind of person that appreciates the significance of the word no.

But in a world where vampires peddle their blood as the latest and greatest drug of choice, it’s only a matter of time before the next big thing hits the market. Someone or something is killing vampires to steal their hearts, and unlike Rhiannon, this isn’t their first stroll around the undead block.

I had Dead, Undead or Somewhere in Between sitting on my TBR list for like forever. It sounded like a book I would really enjoy but for reasons unknown I kept postponing picking it up. So, I'm just really grateful to Brandy from Miss Vain's Paranormal Fantasy who urged me to pick it up, cause honestly, it's just an amazing book I really should have read long ago!
At first, the fact that the hero was named Disco left me feeling a bit awkward. I mean how sexy could a vampire named Disco could be? But believe me when I say it, Disco wasn't just sexy, he was plainly HOT and soon I even forgot how he was named. To be honest, he could be named any kind of awkward name and I would still love him. That being said, I can now proceed on my actual review.
Dead, Undead or Somewhere in Between is a really interesting UF title that once you start reading it, there's no way you're able to stop. The plot progresses constantly and the world building is intriguing and unique in many levels, something that makes more sense by the end of the book.
Rhiannon is one of my favorite heroines, independent, sassy and the way she curses constantly was a plus for me. I know many have problems with curses and I have caught myself being annoyed by constant cursing in some other books but not here. The way Rhiannon talks and behaves are more of a personal defence mechanism, something I can well relate to. And for that, I really loved her as a character!
Disco, well Disco is plainly amazing and one of the hottest vampires since Bones for me. He's not Bones but an alpha male I can appreciate nonetheless!
This, would be a 5 star review for me, if not for a couple completely personal problems I had while reading this book. I've said in other reviews that the fact that I'm not a native speaker causes me some problems from time to time and unfortunately that was the case with this book. I had some difficulties adjusting to the slang and especially at the beginning I couldn't make sense of some things. That, as I said is completely personal and not a source of problems for someone else.
And my other problem, which could as well derive from the fact that I struggled to adjust to the language in the beginning, was the fact that I couldn't exactly understand how the world Saare created functioned. At times, it was like things just happened without me understanding exactly why, other than the fact that the plot progressed in that way. Maybe explanations weren't given or maybe they were given and I just lost myself in translation.
To sum it up, Dead, Undead or Somewhere in Between is a fantastic book that despite my minor problems, I really enjoyed!Needless to say, I have already started reading the second book in the series. That ending left me with no other options!