The Gathering Storm by Robin Bridges 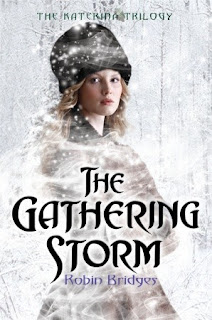 The Gathering Storm is a really interesting book, a really unusual book and in overall a good debut novel which was awkward at times but enjoyable nonetheless.
First of all,a fact that not many are aware of, I'm partly of Russian heritage,so a book based in the Romanovs era, in Russia, was more than intriguing for me...!And it more or less delivered what I expected from the premise.
The characters were fairly well written,Katerina is a well structured and developed leading character with traits you can't help but admire.She's compassionate,smart and ready to sacrifice herself for those she loves.
Around her is woven a very intricate world of paranormal creatures,love and betrayal.
One more thing,the romance is really well written as well.Not too soon in the story or rushed.Just in the right amounts,for me at least.
Now apart from all that,I can't help but say that I couldn't connect with the story as much as I would like or as much as I expected.The world Robin Bridges created is really complicated and unnecessarily at that for me.Many paranormal creatures make their appearance in this book and to be honest I just couldn't place them all correctly in the story.And to top all that,some native Russian myths were thrown in as well,to complicate things even more.We have faeries,vampires (from many different slavian myths),necromancers, ghouls, the bogatyr and a couple more I am forgetting right now,all woven together in a very real Russian setting,were names of real people (Pavlov, Curie) or situations are used.So, we have a real historical setting and more than necessary mythical elements,all combined in The Gathering Storm.That, might sound intriguing to many,but to me, well, I just failed to see the connection between all of them.I would more than often wonder why some of the characters knew the paranormal id of many Russian socialites while others didn't.It wasn't that there were certain people who knew everything,just some knew some things,others something else with no consistency.I really don't know if I'm making much sense...
Anyway,The Gathering Storm was in overall a good book and a really ambitious attempt to combine together many elements that isn't always successful but manages to create an intricate and fascinating world nevertheless!