Waiting on Wednesday: Under the Never Sky 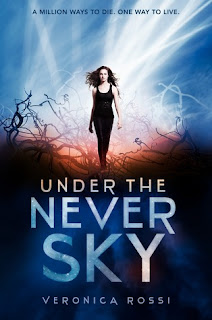 Under the Never Sky by Veronica Rossi
Publication Date: January 3rd 2012
Publisher: HarperCollins
Pre-Order via Book Depository
Summary from Goodreads:
Aria is a teenager in the enclosed city of Reverie. Like all Dwellers, she spends her time with friends in virtual environments, called Realms, accessed through an eyepiece called a Smarteye. Aria enjoys the Realms and the easy life in Reverie. When she is forced out of the pod for a crime she did not commit, she believes her death is imminent. The outside world is known as The Death Shop, with danger in every direction.

They come together reluctantly, for Aria must depend on Perry, whom she considers a barbarian, to help her get back to Reverie, while Perry needs Aria to help unravel the mystery of his beloved nephew’s abduction by the Dwellers. Together they embark on a journey challenged as much by their prejudices as by encounters with cannibals and wolves. But to their surprise, Aria and Perry forge an unlikely love - one that will forever change the fate of all who live UNDER THE NEVER SKY.
What I think:
Under the Never Sky sounds like the book for me!I just can't resist an exciting dystopian novel. And this one sounds really promising. The early reviews about it are all good, which is always a plus!
And the fact that the two main heroes seem to come from totally different backgrounds make me want to pick up this title as soon as possible!