REVIEW: Suddenly You by Lisa Kleypas 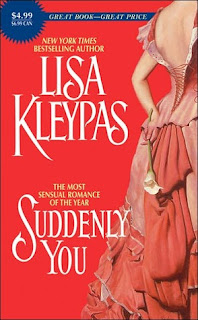 She was unmarried, untouched and almost thirty, but novelist Amanda Briars wasn't about to greet her next birthday without making love to a man. When he appeared at her door, she believed he was her gift to herself, hired for one night of passion. Unforgettably handsome, irresistibly virile, he tempted her in ways she never thought possible, but something stopped him from completely fulfilling her dream.


Jack Devlin's determination to possess Amanda became greater when she discovered his true identity. But gently bred Amanda craved respectability more than she admitted, while Jack, the cast-off son of a nobleman and London's most notorious businessman, refused to live by society's rules. Yet when fate conspired for them to marry, their worlds collided with a passionate force neither had expected. . . but both soon craved.

Oh well,what can I say about Lisa Kleypas and her books???In the worst case scenario her books are far better than other's and in the best,mindblowing!In this case,Suddenly You falls into the latter category!I just loved it!!!
From the leading couple,the actual story and the writing style,there isn't one tiny little thing I can find to complain about (and anyone who's read a couple of my reviews knows exactly how much I like to complain about things...).
Amanda is among my favorite characters of this genre.Smart,strong and independent,no matter what!Devlin,well,I can't complain about him either.Kleypas surely knows how to make her male protagonists sexy beyond imagination, and who I may to disagree with that!
The pace of the novel is even,despite the somewhat rushed beggining.One might think that after Amanda and Jack were "introduced" in such a way,things might get the downhill,but no,their relationship is slow moving and perfect,exactly how I like it!
Honestly,I really can't say more about Kleypas's books!I notice that everytime I review one of her books,my reviews come out a bit short,but I really don't have to say anything more!Her books are amazing and that sums up wonderfully whatever I'm thinking!