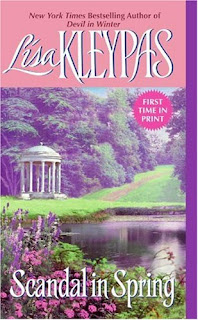 After spending three London seasons searching for a husband, Daisy Bowman's father has told her in no uncertain terms that she must find a husband. Now. And if Daisy can't snare an appropriate suitor, she will marry the man he chooses—the ruthless and aloof Matthew Swift.


Daisy is horrified. A Bowman never admits defeat, and she decides to do whatever it takes to marry someone . . . anyone . . . other than Matthew. But she doesn't count on Matthew's unexpected charm . . . or the blazing sensuality that soon flares beyond both their control. And Daisy discovers that the man she has always hated just might turn out to be the man of her dreams.


But right at the moment of sweet surrender, a scandalous secret is uncovered . . . one that could destroy both Matthew and a love more passionate and irresistible than Daisy's wildest fantasies.

Scandal in Spring is my second least favorite book in the Wallflower series with the least being the first one Secrets of a Summer Night.And that's not because this book is bad,it's just that after Devil in Winter,this one is simply not nearly as good,but still better than other books in the genre...
The story of Daisy and Matthew is sweet and sexy,in her own way,but nothing groundshaking.I didn't get to know anything new about Daisy in her story,something that happened in both the previous books of the series but I have to admit that I love Matthew!In his own way he made me love him above all the male leading characters of this series.I don't know if it was his inner strength or the vulnerability he showed at times that made me love him so much,but I just couldn't help it!
I loved all the twists in the end,regarding Matthews past,and how the story concluded and the only reason I didn't like it as much as the previous two books rests in the fact that I found the romance between them more subtle in a way.I somehow didn't get the fireworks I got in the previous books,but I enjoyed Scandal in Spring nevertheless!
All in all,Scandal in Spring may not be my favorite book in the series,but it was one I enjoyed reading and as always,Lisa Kleypas made me crave to read her other books even more!