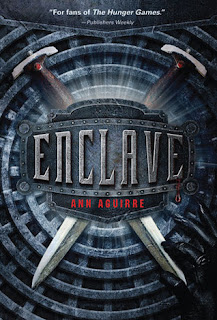 WELCOME TO THE APOCALYPSE


In Deuce’s world, people earn the right to a name only if they survive their first fifteen years. By that point, each unnamed ‘brat’ has trained into one of three groups–Breeders, Builders, or Hunters, identifiable by the number of scars they bear on their arms. Deuce has wanted to be a Huntress for as long as she can remember.


As a Huntress, her purpose is clear—to brave the dangerous tunnels outside the enclave and bring back meat to feed the group while evading ferocious monsters known as Freaks. She’s worked toward this goal her whole life, and nothing’s going to stop her, not even a beautiful, brooding Hunter named Fade. When the mysterious boy becomes her partner, Deuce’s troubles are just beginning.


Down below, deviation from the rules is punished swiftly and harshly, and Fade doesn’t like following orders. At first she thinks he’s crazy, but as death stalks their sanctuary, and it becomes clear the elders don’t always know best, Deuce wonders if Fade might be telling the truth. Her partner confuses her; she’s never known a boy like him before, as prone to touching her gently as using his knives with feral grace.


As Deuce’s perception shifts, so does the balance in the constant battle for survival. The mindless Freaks, once considered a threat only due to their sheer numbers, show signs of cunning and strategy… but the elders refuse to heed any warnings. Despite imminent disaster, the enclave puts their faith in strictures and sacrifice instead. No matter how she tries, Deuce cannot stem the dark tide that carries her far from the only world she’s ever known.

I had to enjoy so much a dystopian novel since last year's release of Mockingjay!That's how much I enjoyed Enclave by Ann Aguirre and that's how good a book it is for me to put it beside Hunger Games!Everything about this book just screams awesome!
As soon as I started reading Enclave,I had that certain feeling you get when you know that you have something amazing in your hands!And I'm more than glad that this feeling remained up until the end of this book!
The writing style is amazing!Ann Aguirre created a unique and well structured post apocalyptic world that grabs the reader's interest and keeps him glued to this book up until its ending!And even then,you are just left wanting some more!
Ann Aguirre thought really well of her world and managed to pass all that to her readers.Everything just clicks in this story and unlike some dystopian novels,what she describes has a feeling of plausibility,her post apocalyptic world could easily be our world in the future.Plus,every tiny detail is well thought and researched.For example,while reading that the characters were eating canned food that could easily be over 100 years old,I couldn't help but think "No way!",only to read in the author's note in the end of the book that there's proof that canned food can safely be consumed even 180 years after being canned!
The characters are well developed and not only the main ones but the secondary as well.Even characters that didn't play a crucial role in the story,somehow manage to stick to your mind.Deuce is among my favorite characters in YA novels,strong and determined and in all,a character that sticks to your mind,long after you finished reading the book.
The romantic element of this book,although subtle,made the story even more appealing and gave it a lighter tone.
All in all,I loved Enclave and I just can't wait for the sequel!Totally recommending it to everyone!

Email ThisBlogThis!Share to TwitterShare to FacebookShare to Pinterest
Labels: Ann Aguirre, Reviews, YA