I know I usually don't review any movies I watch,but I just have to make an exception about Harry Potter!I did so,after watching the first part of Harry Potter and the Deathly Hallows and I will do so again!Well,actually that's not so much of a review (I don't really qualify to review any movie,I know nothing about them to justify any opinion I express...) it's more of my feelings towards the final part of a series of books and movies (in this case) that let's face it marked an entire generation!
In an amazing event last night,in one of the biggest movie theaters here in Athens,I was lucky enough to watch among the first the second part of Harry Potter and the Deathly Hallows!Well,it wasn't just that,before we watched the second part,we also watched the first,just for good measure!It was an event that lasted about 4 and a half hours and I enjoyed every single minute of it!And believe me I'm not known for my patience and my ability to sit still in a chair for that amount of time,beside people who just can't stop commenting on every single thing they watch,plus making their own predictions (such as,my favorite,OMG Harry is Snape's son!)
Anyway,regardless everything,last night I had the time of my life!
Plus, just look at what they gave as at the entrance of the movie theater: 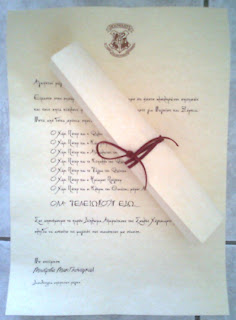 That's right,we got our diplomas for watching all seven movies from Professor McGonagall herself!Silly,but I loved it!
I just can't begin to describe how much I enjoyed both parts of the final installment of the series.I also liked the 6th movie as well,but for once,I think they did well to split up the 7th book into two movies.That way,little parts of the book were omitted,satisfying my inner book nerd...
I really enjoyed the duelling parts and the siege of Hogwarts,plus all the funny and witty dialogues throughout the whole movie!
Anyway,I won't say anything else,I'm sure almost everyone will watch this movie at one time or another,cause let's face it,there aren't many book lovers that haven't read or watched Harry Potter,regardless if they liked it or not.And even though the movies aren't nearly as good as the actual books (I'm a book nerd,for me almost always the books are better than their movie adaptations!),to be honest,waiting for them to come out,was like a consollation,a false feeling that the series hasn't yet finished.But now that I really can't mock myself any longer,I don't know,I'm kind of sad that everything ended...And I don't care how lame that sounds for a 25 y.o.(most of my friends mock me for my obsession,even though they all,watched the movies...)!Really,I love that series,both books and movies!
Posted by Unknown at 14:22