REVIEW: The Rake (Lessons in Love,#1) by Suzanne Enoch 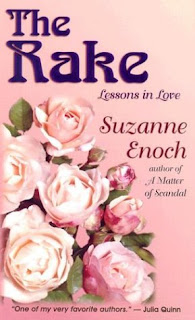 Three determined young ladies vow to give three of London's worst rakes their comeuppance -- but when these rogues turn the tables, who truly learns a lesson in love?


Once upon a time, the notorious Viscount Dare charmed Lady Georgiana Halley out of her innocence -- to win a wager, no less! -- and now he must pay dearly. The, plan is simple: She will use every seductive wile she knows to win Dare's heart...and then break it. But his smoldering gaze once again tempts Georgiana to give in to desire -- and when he astonishes her with a marriage proposal, she wonders: Is he playing yet another game...or could it truly be love this time?

The Rake,was the first historical romance book I read and I'm not frantic about it!Well,I'm guesing after reading about 10 marvelous books in the genre,I was bound to read one that didn't amaze me.
It's not that The Rake was a bad book,more like one that I won't remember for long after finishing it and one whose story didn't appeal to me so much.
First of all,I had a problem with the main concept of the plot.The whole thing of a woman teaching a lesson to a man,although interesting,it was tricky to be executed without problems.And in Rake's case,that lesson concept wasn't executed in that way.Georgianna,in her attempt to teach Dare a lesson struck me a bit as manipulative and meddlesome and that was the trickiest part of the plot at least for me: Making the person who's trying to teach something to someone not struck as meddlesome.Because let's face it,when you are not involved personally with someone,you have no right to teach him anything,only give your advice.
Georgianna's Lessons struck me more of a revenge plan than anything and should that be the case,I wouldn't have minded.Cause she had every reason to want to.Anyway,through her actions Georgianna struck me as someone who doesn't know what wants from life and she's undecided about everything and constantly changing her mind.I didn't dislike her precisely,I just couldn't care less about her.
Dare on the other hand,was a more interesting character but he couldn't be less of a Rake like the title of the book claimed.There was nothing rakish in his ways,and even if he was in the past,the reader wasn't there to justify the rumor.
But the set of the secondary characters was far more interesting in my opinion,with Robert,Dare's brother, being my favorite.
Other than the characters,the story itself,though well written,is not something I will remember,a bit slow,with only memorable parts those of Georgianna's bickerings with Dare.
As I said, The Rake,although not a bad book,isn't one that excited me in any way and certainly not one I will re-read sometime.