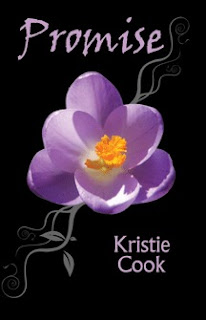 Alexis Ames decides to learn who she really is, with or without the help of her mother, who guards their secrets closely. After meeting Tristan Knight and discovering that he s not normal either, the secrets begin to unravel. Their union brings promise to the future of mankind. But it also incites a dangerous pursuit by the enemy. Because they are a match made in Heaven and in Hell.

Promise was not exactly what the premise promised it to be...As soon as I read the summary of this book,I kind of expected a YA novel,full of action or twists in the plot,with a delicious romance surrounding everything!
What I got instead,was a good (but not extraordinary) romance plot,surrounded by some twists and even less action.
One thing I absolutely loved in this book,was the writing style.Kristie Cook knows what she's doing and she's doing it more than fine!I liked how the story unfolded and how those few twists in the plot were delivered.The romance between the two main characters was good,but not nearly as good as I expected it to be after reading some reviews by fellow reviewers whose opinion I more than value.Maybe I had really high expectations exactly because of all the glowing reviews I read about this book,and I was prepared for a mind blowing book,only Promise,never was mindblowing,at least for me.
I often promise to myself that I will try and read as few reviews as possible for a book before starting reading it,thus minimizing whatever high expectations the glowing reviews might create or for the sake of being able to see for myself the drawbacks of a book rather being prejudiced about it.But,no matter how many times I try to do just that,I can't resist the urge to check previously the majority's opinion about a book.
And maybe that was the problem with Promise.I kind of expected a book that would stand out,but for me it just didn't.The plot was good,that is for certain,but I found myself tired through Tristan's and Alexis's romance.And not because it was that bad but more because I didn't expect that the romantic element would be the prime focus of the story.
I found myself unable to decide my feelings towards either Alexis or Tristan.There were times I liked both of them and times were I just couldn't get why they were doing some things.As for example the way Alexis overreacted after a certain encounter with a Daemoni...Plainly unjustified at least the way I saw it.As if Alexis reacted that way only to break the image of the blissfully happy couple and to put some tension in their relationship.Not to mention that as a character,Alexis was either too submissive or too gullible at times.Tristan was a better constructed character and saved the day,at least when he didn't declare his undying love to Alexis that is.
Anyway,I find myself once more having a different opinion with the majority of readers and that only makes me wonder if I need to take a break from YA books (only Promise isn't exactly a YA book,there are some rather informative sex scenes in it).The problem is I trully love the genre and I only find myself turning back for more!And it's not that I don't take any joy from the genre...I do enjoy the majority of YA books I pick.That only leaves with the other alternative,that I may seek something different in my books than I did in the past.
Either way,Promise isn't a bad book by any means.It's just that I kind of needed something more or something else.

Email ThisBlogThis!Share to TwitterShare to FacebookShare to Pinterest
Labels: Kristie Cook, Reviews, YA