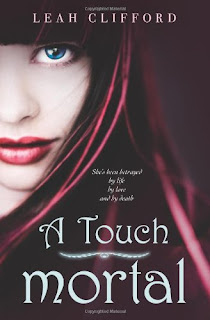 
Not his saunter down the beach toward her. Not his unbelievable pick-up line. Not the instant, undeniable connection. And not his wings.


Now trapped between life and death, cursed to spread chaos with her every touch, Eden could be the key in the eternal struggle between heaven and hell. All because she gave her heart to one of the Fallen, an angel cast out of heaven.


She may lose everything she ever had. She may be betrayed by those she loves most. But Eden will not be a pawn in anyone else's game. Her heart is her own.


And that's only the beginning of the end.

A Touch Mortal was a major disappointment, at least for me...I was so eager to get this book in my hands,what with the interesting premise and the beautiful cover,only to feel majorly let down pretty soon with this book.
You know that feeling when you open a book and from the very first pages you know you'll end up loving it or hating it?Well,with A Touch Mortal I kind of knew that I would have a problem with this book as soon as the second chapter began.I mean,the first chapter introduces the reader to the 3 main characters of this story,Eden,Az and Gabriel.Az shows an immediate attraction to Eden and flirts her with some lines I really don't want to think about and I know that if someone hit me with those,I would start running like mad away from him...
Anyway,I tried to get past those lines.After all it was only the first chapter,way too early to make assumptions.But when the second chapter began and we had skipped pages in the story,and Az and Eden not only were together but already declaring their undying love to each other,well,to say the least I was tempted to put this book down immediately...
I really can't tell what twisted idea made me continue reading.After all,I'm not really famous with my patience and when I don't like something, I just skip it.But all the glowing reviews that promised that after a rough start this book was more or less fantastic,I decided to give it a try.
True,after a couple of chapters,things got better but only slightly.At least for me.After all,not everyone likes the same things...
I just couldn't get into this book at all.The characters were a bit flat,I couldn't like or relate to anyone and the story was chaotic.
Leah Clifford tried to do something really extraordinary,at least that was my opinion while trying to understand the world building,but somewhere lost it among the lines.Details where slowly given to the reader in order to understand certain things,but at most times I just felt lost,like I should have known something crucial,only I had skip certain classes when the lesson was given.
To be honest,somewhere after the middle of this book I felt so tired with it and so unwilling to read even a single page that I just left it aside.Reading is all about fun and recreation time,I never thought of it as a duty and never felt obliged to finish a book I just can't bring myself to like.So,I think that if up until the middle of this book I couldn't care about the story,things wouldn't improve later,even if the story did get better.A Touch Mortal is just a book whose story didn't appeal to me in any way...
I'm always sad when I write a bad review,both for the writer and the book itself.But on the other hand I can't lie and praise a book I struggled to read.A Touch Mortal wasn't the book for me but there are many readers out there that did enjoy this book despite the fact I couldn't see why.