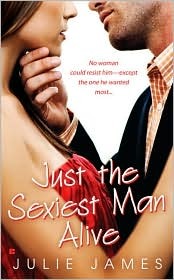 A fabulously fun, romantic comedy from a dynamic new talent.


Nothing fazes Taylor Donovan—not in the courtroom and not in her personal life. So when she's assigned to coach People's "Sexiest Man Alive" for his role in the next big legal drama, she refuses to fall for the Hollywood heartthrob's charms. Even if he is the Jason Andrews.

The Sexiest Man Alive was a bit of disappointment for me to say the least...After having read the last two books by Julie James,I expected a really good romance book and instead I got something that barely hold my interest and tired me a bit while reading.
This book has all the potential to be perfect!For one,the very plot is the dream coming alive of many,if most, women alive: The perfect,gorgeous and sexy as hell movie star who falls hard for the typical woman next door.To be honest,I don't know a single female friend of mine who hasn't in some time of her life wished that her favorite actor would somehow in a magical way meet her and fall in love with her, myself included!
So The Sexiest Man Alive toys with that exact fantasy making it all that easy not only to be able to connect with the leading characters of the book,but be able and wish to actually be in the heroine's position...And although for some time I did exactly that,sometime soon after the beggining of the book, the last thing on my mind was that swoon worthy fantasy...
I don't know what exactly turned be completely off...Maybe the constant label dropping (If I hear one more time about Grey Goose,I swear I'll scream),maybe the fact that the hero was so arrogant beyond imagination and so self absorbed,especially at the beggining of the story, that I only wish not all famous people are like that (which I'm gathering are not),maybe the strong feminism of the heroine that in my book only made her worse than the hero.I understand the meaning of a woman being strong and independent,but I don't think that being all that must make you look and act in a stupid way or not knowing exactly what you want from your life and in your life,something that as a result makes you look even more arrogant than the most self centered person.
Besides that,I just couldn't see Taylor as your typical next door woman...She was so perfect that she could be a model or anything she wanted only if she chose too.So,the whole meaning behind the story went just unnoticed by me.Jason,despite his initial portraying was a far more likeable character for me but the authors constant reffering to him,after a point,as the sexiest man alive,just made me roll my eyes!Alright,I got it,as the title announces,he's the sexiest man alive on earth...!Why keep mentioning it again and again?
Plus,the extensive references to Taylor's case at court bored me to no end.I couldn't see the relevance to the plot of the book and I was really confused at times by the terminology (I'm no lawyer after all,should it be psychology references I would be more interested,as a doctor would be more fascinated by a thorough surgery description,bottom line,no need for such extensive and detailed description of a case).
Anyway,as I said in the beggining,this book was quite disappointing compared to James' other work which I enjoyed immensely!I only hope that her other book,published exactly after this one is far better,which after all is the author's first published work.