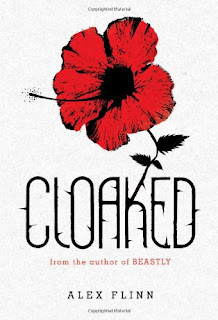 I'm not your average hero. I actually wasn't your average anything. Just a poor guy working an after-school job at a South Beach shoe repair shop to help his mom make ends meet. But a little magic changed it all.


It all started with a curse. And a frognapping. And one hot-looking princess, who asked me to lead a rescue mission.


There wasn't a fairy godmother or any of that. And even though I fell in love along the way, what happened to me is unlike any fairy tale I've ever heard. Before I knew it, I was spying with a flock of enchanted swans, talking (yes, talking!) to a fox named Todd, and nearly trampled by giants in the Everglades.


Don't believe me? I didn't believe it either. But you'll see. Because I knew it all was true, the second I got cloaked.

After all the high praise I heard and all the glowing reviews I have stumpled upon of different books by Alex Flinn,to say the least,I was expecting to read an outstanding novel, when I picked up Cloaked.And although Cloaked is not half a bad book,somehow I didn't find it outstanding or fantastic...
First of all,I have to say,that The Frog Prince is one of the fairy tales I'm not that acquainted with.Surely,I have read it once or twice as a kid but it wasn't among my favorites,so all the details are a little blurred.So,when I started reading Cloaked,believe me I had no expectations whatsoever,as to whether the story was consistent to the original,plus,I can't possibly say whether Cloaked is a good adaptation or not...
Having said that,Cloaked was a fun book!I liked the main hero,Johnny,although I found him a bit shallow at times,but ok,that didn't bother me much and despite,my overall feelings towards this character are mostly good!
I loved Meg!She was the one character from the very beggining of the book,I could identify most easily and a character in general well developed and whole,a wholeness that I'm afraid I couldn't descern in Johnny,despite him being the protagonist.Certainly,he developed throughout the story,but Meg managed to come off as a whole more unique and completed character.
The story was good.There was a non stop action after a point,and the scenery kept changing the whole time,and Flinn woved perfectly in her story the fantastical with the true element.Apart from The Frog Prince there were other references in fairy tales throughout the whole book,something that I found both intriquing and confusing...The confusing part comes from me,expecting only the retale of a single fairy tale,and not a couple of more others...
My biggest problem with this book though,was the fact that although it was a light and funny and fun read,it couldn't hold my interest for long.I found myself tired somewhere along the middle of the story,and to be honest,I can't pinpoint exactly what was that thing that made me find it hard to concentrate.The writing style was good and vivid but despite that,it tired me a bit.The last 1/3 of the book though is really good!I liked the spins towards the ending,although they weren't that unpredictable,but still,I liked them a lot...
In the end of the day,Cloaked is a fun book,but definitely one I won't remember for long I'm afraid...As a book had definitely its good parts but as a whole,I think that Cloaked is not the kind of the book that sticks in your mind and stays there for some time after you finished reading it.

Email ThisBlogThis!Share to TwitterShare to FacebookShare to Pinterest
Labels: Alex Flinn, Reviews, YA