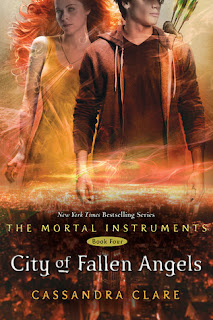 The Mortal War is over, and Clary Fray is back home in New York, excited about all the possibilities before her. She's training to become a Shadowhunter and to use her unique power. Her mother is getting married to the love of her life. Downworlders and Shadowhunters are at peace at last. And—most important of all—Clary can finally call Jace her boyfriend.


But nothing comes without a price.


Someone is murdering the Shadowhunters who used to be in Valentine's Circle, provoking tensions between Downworlders and Shadowhunters that could lead to a second bloody war. Clary's best friend, Simon, can't help her. His mother just found out that he's a vampire and now he's homeless. Everywhere he turns, someone wants him on their side—along with the power of the curse that's wrecking his life. And they're willing to do anything to get what they want. At the same time he's dating two beautiful, dangerous girls—neither of whom knows about the other.


When Jace begins to pull away from Clary without explaining why, she is forced to delve into the heart of a mystery whose solution reveals her worst nightmare: She herself has set in motion a terrible chain of events that could lead to her losing everything she loves. Even Jace.


Love. Blood. Betrayal. Revenge. The stakes are higher than ever in City of Fallen Angels.

Cassandra Clare just worked miracles again with City of Fallen Angels!To be completely honest with myself,when I first heard the announcement of a 4th book coming to The Mortal Instruments series and then the new one,stating that the series will be extended to six books in total,I was both excited and a lot apprehensive too.We all thought that the story had reached it's conclusion,and although it's not the first time a writer decides to resume his story after the end has come,in many cases,that decision wasn't all too successful.I myself,have come across such cases,and because TMI series is among my favorites ever,I was both excited and afraid...
But I shouldn't be...Cause Clare knows exactly what she's doing,and she's doing it really well.At least that's how I feel about her work!Her writing style is amazing,and I love all those descriptions of places and facts but what I love the most about her work,is that everything in her story is set in such a way that plays a crucial role for the future,or has its place in the past.Every detail and every event just has it's meaning,waiting to be unraveled sometime later in the story,if it's not immediately connected with the past.I mean the connection that many things have with The Infernal Devices series just awed me!I knew that the two series are connected but not interfering with each other,but still,reading this book just amazed me!
I loved how the characters evolved.Especially in Jace and Simon's case the evolvement was huge!Jace was by far my most beloved character in the series,what with his being sarcastic and all,but in CoFA,all the events of the past three books seem to have affected him and the way he behaves.He is still the adorable Jace we were all used to,but now he haves to come to terms with all the shocking truths he learned about himself and what he thought were real in his life.And all that,just made me love him even more...!We get to see more of Simon also!Truthfully,Simon was never among my favorite characters.I liked him surely,but I wasn't mad about him.In CoFA though,we get to know him a lot more and all that I learned about him made me like him and understand him,more than I could in all the previous three books combined.
In general,most characters although remain more or less the same,despite Jace,they just grow through the tragic events they went through.
I'm aware,that many people just found too much the romance in this book.I've read some reviews stating so,but I just couldn't mind such a thing.The romanctic plot between Jace and Clary is as good as ever,and the rest,well,I though that went along perfectly with the story.Any romantic element in CoFa,I thought that went along with the story and complemented it rather than be the main focus or abstract the reader.I just loved to see more about others as well,and just not Jace and Clary!
All in all,CoFa just managed to reignite my interest in a story I though had ended and I just can't wait for the next book.I can't wait for The Clockwork Prince either and believe me a reread of both those series is well needed and I will do it before the final installments get published.I just want to be aware even of the tiniest detail when the time comes!