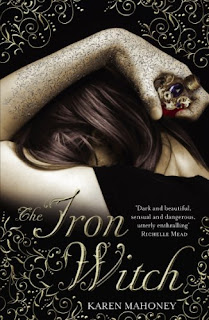 Freak. That's what her classmates call seventeen-year-old Donna Underwood. When she was seven, a horrific fey attack killed her father and drove her mother mad. Donna's own nearly fatal injuries from the assault were fixed by magic—the iron tattoos branding her hands and arms. The child of alchemists, Donna feels cursed by the magical heritage that destroyed her parents and any chance she had for a normal life. The only thing that keeps her sane and grounded is her relationship with her best friend, Navin Sharma.


When the darkest outcasts of Faerie—the vicious wood elves—abduct Navin, Donna finally has to accept her role in the centuries old war between the humans and the fey. Assisted by Xan, a gorgeous half-fey dropout with secrets of his own, Donna races to save her friend—even if it means betraying everything her parents and the alchemist community fought to the death to protect.

The Iron Witch,left me with somehow mixed emotions.Although i wasn't really amazed by it,i can't say i didn't like it at all either.There were times i was really excited with it and eager to know how things evolved and times were i was a bit bored.I just couldn't get into this book,no matter how much i wanted it.
I was more than excited when i picked up this book.It was among those books that i wanted to read as soon as i saw that gorgeous cover and read the interesting premise.And the story in this book is really interesting.And well written.My problem was that despite of those facts,i couldn't care about what happened in the story.Maybe it's just me and i wasn't in the right mood to read this book.I honestly can't say.
My main problem was that i felt that everything in this story were a bit rushed.The romance between the heroes was rushed.The explanations for the world again were quickly given and everything the heroine, Donna,  needed was again right in front of her.I mean,she wanted to find her abducted friend,voila,she was able after a good guess to find him.She needed something very well hidden,again,she only needed a good guess,a little effort,and she had it in her hands.I don't know if that happened because the book is so small.Maybe that's the case.But after how quickly and easily Donna found what happened to Navin,i just had lost my interest.
Again,i have to point that maybe that's just me.To anyone else,maybe this book is a small and cute and wonderful story wrapped in a gorgeous package.Which it is!
The Iron Witch is a cute story,set in an interesting world.The writing style is good and i really enjoyed the pictures Karen Mahoney was able to draw in her book.I just wanted something more to hold my interest.
I really liked Donna, her character and the way she delt with problems.I found interesting her friendship with Navin.I couldn't care less about Xan,her love interest.Really,although he made quite an impression on me when he first appeared,that interest was short lived.He was just a secondary character,standing beside Donna,eager to help her with anything!
And the Order of the Dragons...For such a major and long lived alchemist order,i found a bit naive the way one of their own was able to steal their property.
Anyway,The Iron Witch is surely a fun way to spend your hours and due to the fact it's small you propably won't even notice when you'll reach the last page.I just wish the writer would delve into some more details,at least on the suspence scenes.To be honest,i'm not sure i will read the next installment but i'm also a bit curious,so who knows!

Email ThisBlogThis!Share to TwitterShare to FacebookShare to Pinterest
Labels: Karen Mahoney, Reviews, YA