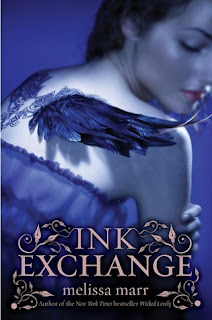 Unbeknownst to mortals, a power struggle is unfolding in a world of shadows and danger. After centuries of stability, the balance among the Faery Courts has altered, and Irial, ruler of the Dark Court, is battling to hold his rebellious and newly vulnerable fey together. If he fails, bloodshed and brutality will follow.
Seventeen-year-old Leslie knows nothing of faeries or their intrigues. When she is attracted to an eerily beautiful tattoo of eyes and wings, all she knows is that she has to have it, convinced it is a tangible symbol of changes she desperately craves for her own life.
The tattoo does bring changes; not the kind Leslie has dreamed of, but sinister, compelling changes that are more than symbolic. Those changes will bind Leslie and Irial together, drawing Leslie deeper and deeper into the faery world, unable to resist its allures, and helpless to withstand its perils. . . .

Ink Exchange,although a second book in a series was quite different...
Different from Wicked Lovely in many ways although the story unfolds in the same world with it and the characters are more or less the same but with the addiction of some really interesting ones.And i really loved all those differences!
It took me way too long to read Ink Exchange (a week and more for a book is way too much time for me) but it wasn't because i didn't like it.Maybe i couldn't concentrate as much as i'd like with no obvious reason.The thing is that the sequel to Wicked Lovely was way better for me.I loved the characters and i could sympathise with them,feel them and understand their actions unlike in Wicked Lovely.Ash was an ok character,but a bit lukewarm at times (though granted,i believe her contribution in the srory over the next books will be more noticeable and her character is good),Seth was amazing,no complaints whatsoever here,but Keenan...?When Wicked Lovely ended i haven't made up my mind whether i liked him or he just wasn't my type so i settled for somehow ignoring him,but after Ink Exchange,well,i definitely made up my mind and i can't see how it might that improve.
On the other hand,the leading characters here are far more likeable for me and more complete,maybe because this one book is the only one where they get to tell their story,i don't know.Leslie is a teenager going through her personal drama and trying to cope with all the bad things that happened to her.Niall is also a good leading male character,caring,strong and human in ways most people could never be.But the true revellation for me in this book was Irial,the suppossedly bad guy or the equivalent of Keenan in the Dark Court.But although i expected him to be much worse than Keenan,he ended up being way better in some parts,and as much cruel with him in others.Irial,just like Niall had a human part that other faeries didn't and i really enjoyed that part.It added in the story and for me balanced the almost complete lack of action or even hint of action.Granted,Wicked Lovely wasn't an action packed book,so you don't expect for the sequel to be a journey to actionville but somehow i waited for something,anything,to happen apart the obvious-the ink exchange- some explanation about what it was and its consequences.That's all this book was about in the end of the day but as i said,the characters and some of the subjects Melissa Marr decided to touch in this book (such as rape,drug use or domestic violence) compensated for the lack of anything else i might have expected.
All in all,it may have taken me quite a few days to read Ink Exchange (but probably i am to blame about it cause i couldn't concentrate on anything)  but it was just as amazing Wicked Lovely was and in some ways even better than it.I'm just sad cause i won't get to read again about Leslie,i grow really fond of her and who knows,maybe in the books to come in the series she will reappear although i doubt it...

Email ThisBlogThis!Share to TwitterShare to FacebookShare to Pinterest
Labels: Melissa Marr, Reviews, YA