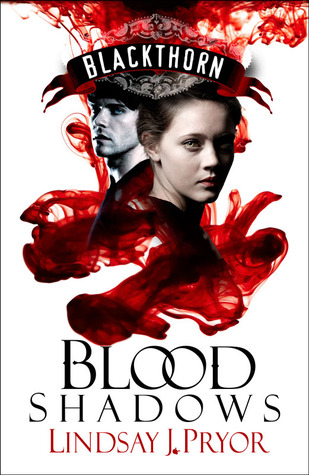 For vengeance - would you trust a vampire?

For justice - could you betray your family?

For love - are you ready to question everything you believe in?

Gifted with the ability to read the shadows of 'third species' beings, Caitlin Parish is the Vampire Control Unit's most powerful agent. Despite that, her mission to hunt down Kane Malloy - a master vampire - comes with a death wish. Many have tried, but few have survived.

For Caitlin, tracking Kane is about more than just professional reputation. With her parents both mysteriously killed 7 years apart to the day, Caitlin knows that without Kane's help she is next.

She has four days to make a deal with the wicked, the irresistible, the treacherous Kane Malloy. The vampire who despises everything she stands for. Or die.

Blood Shadows is book one in the Blackthorn series, brought to you by Lindsay J. Pryor - a British Paranormal Romance author who writes dark, intense and passionate stories.

I just have to admit that the main reason I accepted Blood Shadows for review was the fact that I somewhere saw mentioned that the main hero, Kane, is the new Bones... Yeah I know, I shouldn't be that superficial in my pickings, but wherever I see Bones' name I'm sold. Well, I also read the premise and it was something that I could easily enjoy, so I didn't even think twice before picking Blood Shadows. I was rather excited to read it to be honest.

Now that I read it, not that I had a bad time while reading it or I didn't enjoy it, but the level of excitement for that title has seriously decreased. My primary thought about Blood Shadows is tiresome. I felt tired while reading this book, like it wouldn't end, ever!And although for some books that is a good thing, like I don't want it to end, that wasn't the case with Blood Shadows I'm afraid.

But let's take things from the beginning. And I will start with the good things about this book. Because undeniably, Blood Shadows is a very well written story. Lindsay J. Pryor has done an exceptional job with the way she wrote her story, so good a job, that I even skipped the various editing mistakes. Because in the copy I received there were a few. There were repetitions of words and some grammar mistakes. But still, even if usually those typos annoy me and ruin my concentration on a book, in Blood Shadows, I managed to completely brush them off. Pryor has a way with words and knows exactly what to say and how to say it. I don't think that I have said that before in any of my reviews, but this author's vocabulary is exceptional!

The world building in Blood Shadows, is another thing I really liked in this book. Let's face it, vampires are an overused concept in both UF and PNR, but Pryor's world has something fresh and new. The world she envisioned is intricate and unique but even if I did enjoy that aspect of this story, still, by the end I was left unsatisfied about the way exactly the world worked. For a book that delved too much into various details, I sure expected more about what made this world tick. Not that the reader hasn't enough to understand things, but when I read pages of details about things of no real value then I get to be a bit demanding and need something more about what really matters in a story.

The other thing about Blood Shadows I liked, well, to no one's surprise that is Kane. Be warned, he has nothing to do with Bones, and I can't really understand where the comparison even came from, but still, he's a great character. Even if he was too manipulative for his own good, I still liked him. And in general, the character development in Blood Shadows was pretty good. Not perfect. But good enough.

And now let's start about the things I had a few problems with. First thing, is the author's obsession with details and the very descriptive narration. I have nothing whatsoever against details and I even like some detailed descriptions on occasion, but the excessively detailed narration in most cases tires me. And the thing that made me like this book less than I probably would have otherwise, is exactly that. No matter how good a story is or how much I enjoy it in overall, when I'm feeling tired while reading it is bound to lower my overall appreciation of it.

Especially the part where Caitlin is locked with Kane in his house made me think more than once to put this book aside. All those details and nothing really happening. One of the reasons I really like PNR and UF is how fast the story goes and the action packed scenes. Well, in Blood Shadows, the story couldn't progress any slower and the action scenes were less in comparison and too short. Well, the action is almost non existent, even in the final scene, everything just clicked way too easily ruining the whole climax of the book.

The character development was pretty good like I said, but I have some complaints here as well. Let's face it, Blood Shadows isn't exactly a small or short story, in fact it's the opposite and if you consider how detailed it is and how intricate the world building is, then I kind of expected that we would get to know more about the secondary characters and not just the main ones. And even though the secondary characters are somewhat explored, still Pryor focuses way too much her story on the main couple and their emotions, something that reflects on the time and "room" she gives to the other characters of this story to develop. To put it simply, we get to know many unnecessary things about both Kane and Caitlin when all that space could have been used for another character.

Anyway, Blood Shadows isn't a bad book, not by a long shot. Lindsay Pryor proved with her debut novel that she can write and really good at that. All my problems with this book, could have easily been fixed through a good editing process in my opinion. If Blood Shadows was a few chapters shorter, minus all those details, it could easily have been much better. As it is, it's an interesting story, written really well, that still tired me a lot while reading it.

* This title was provided for review from the publisher