EARLY REVIEW: Sins of a Ruthless Rogue by Anna Randol


Sins of a Ruthless Rogue by Anna Randol 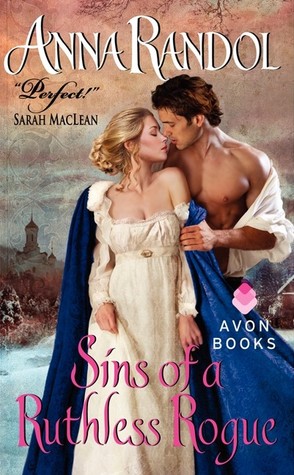 When Clayton Campbell shows up on her doorstep, Olivia Swift is stunned. For long ago, Clayton was the boy who stole her heart. He’s also the man her betrayal had sent to the gallows. A man she believed dead, now standing before her, looking leaner, harder, more powerful than ever, his haunted eyes filled with a lust she had never seen—for vengeance…

Or burned so hot…

He’s a Crown spy who once faced death and escaped unscathed. Yet Clayton Campbell cannot deny that the sight of Olivia rouses in him something more than a thirst for revenge. Or that the bold beauty would lure him once more into a dangerous game. Only this time, Clayton plans to be the victor—with the tempting Olivia in his bed as his prize. But once passion ignites between them, the hard-hearted agent will face his greatest battle yet—for his heart…


Sins of a Ruthless Rogue was an amazing read! I loved it so much that I couldn't possibly put it down as soon as I started reading it. Anna Randol delivered with her story exactly what the summary promised the reader and then some more. I just fell in love with it and now I'm dying to get my hands on the first book of this series.

Sins of a Ruthless Rogue is book 2 in the Sinners Trio series and I have to admit that I was a bit afraid in the beginning that I would have some problems with the story since I haven't read book one. But, Anna Randol did an amazing job introducing her world and characters to her readers so there wasn't a single moment that I felt lost anywhere in the story.

Sinners Trio is a series about three crown spies and their respective love interests and if you know me, then you know how much I love agents or spies. The whole story of this book is reason enough for me to want to read it. Add to that an incredible and unusual setting, well developed characters and an even paced plot and you understand why I loved it!

The things I loved the most about Sins of a Ruthless Rogue was the fact that it was mostly set in Russia and the chemistry between Olivia and Clayton. I really enjoyed how Randol took her story outside of the confines of the English society and transferred it to an ice covered Russia. The descriptions were vivid and detailed and the whole point of view unbelievably fresh.

On the other hand, the chemistry between the main couple was scorching hot! There weren't many sex scenes in there but still this book was both sexy and sensual. Even if Randol hadn't written even one sex scene, her story would still be incredibly sexy. And here is the difference between an author who can stir emotions to her readers through her intricate writing and her focus on her characters' sentiments and an author who just tries to coax them out by blatant descriptions or by writing unnecessary sex scenes. It's the quality that matters and not the quantity and Randol seems to understand that perfectly.

Apart from that, the story is action packed, with just the right pace between the action and romantic scenes and just the right dose of everything. The character development is good and we get to know not only the main but the secondary characters as well. Maybe the fact that there are recurring characters between the books in this series helps Randol, but still, her work in the character department is really good. There's background not only for her main but her secondary characters as well, and everyone has a place in this story, and isn't just standing there ready to be used whenever the story demands it.

All in all, Sins of a Ruthless Rogue was a really pleasant surprise for me, a book I literally devoured and I just want more from this author. Totally recommend it.

* This title was provided for review via Edelweiss.
Posted by Unknown at 16:00