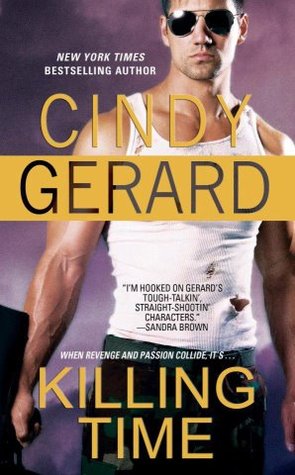 “We can do this easy,” she whispered close to his ear as he groaned in agony, “or it can go real hard on you.” Well, of course he wasn’t going to go easy.

New York Times and USA Today bestselling author Cindy Gerard plunges readers into the heart of a seductive contest of wills between a hard-living hero and a beautiful rogue operative who is on a mission to dig up the secrets of his past. Tension sizzles in this pulse-pounding first adventure in Gerard’s action-packed new series as Eva Salinas lures Mike Brown from the sultry streets of Lima, Peru, to the desolate Idaho wilderness on the hunt for the cold-blooded traitor behind a fatal military operation that haunts them both.


Killing Time is the second book I read written by Cindy Gerard, the first one being To The Edge. And although I didn’t really like that book, I decided to give this author another chance and read something else of hers. But unfortunately, Killing Time wasn’t the right book for me either.

Before I say anything else, I need to clarify that Killing Time is a really well written story. Throughout the whole book, Cindy Gerard’s experience and the fact that she is a best seller author was quite evident. You could see that in the way the story progressed, in the way she built her characters, in everything. Having said that, from the very first chapters and right until the end of this book, I couldn’t really get into the story or really care about the characters and their happily ever after. And I tried really hard to, believe me. But no matter how hard I tried, I just couldn’t bring myself to really care about this story, which brings me to the conclusion, that since technically, Killing Time is a pretty good book, the fact that I didn’t like it, is purely a matter of taste.

I found the story a little bit slow moving at times, especially at the beginning, with way too many military details that confused me. As confusing were the many changes in the POV. And in this point I have to say that maybe that was because of the way the e-arc was structured that didn’t really help matters. So probably, if I had read the final version of the book and not the arc, my opinion on this matter would be completely different. As it was, I had a hard time getting into each POV.

Other than that, Killing Time, is an action packed novel, with some well written action scenes, a good romantic subplot, but still, all that couldn’t hold my interest, even if there wasn’t any insta love (which I always seem to hate), but there was lots of insta lust (which I usually don’t mind). The bad guys as well as the traitor were as predictable as one could get, making my interest on the story, which already was lost, sink into new depths.

All in all, I can’t really say if Killing Time is worth your time or not. It’s purely a matter of taste. Because even though as a book it didn’t work for me, it was quite well written and with a good set of both main and secondary characters.

* This title was provided for review through Edelweiss
Posted by Unknown at 16:00