REVIEW: How Beauty Met the Beast by Jax Garren


How Beauty Met the Beast by Jax Garren 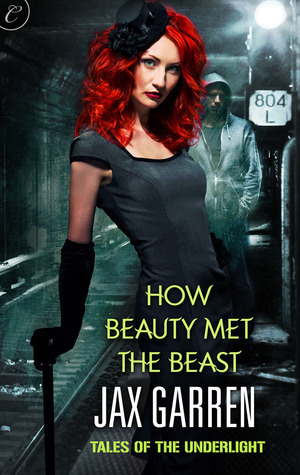 Scarred. Damaged. Living with a terrible secret. Agent of the Underlight Wesley "Hauk" Haukon has nothing left but the fight for liberty against the oppressive Order of Ananke. He's starting to lose hope…and then he sees her.

Despite her night job as a burlesque dancer, grad student Jolie Benoit has always played the mostly good girl. That all changes following a scorching sexual encounter with a stranger whose face she doesn't see. After she's kidnapped by thugs and rescued by a man with a very familiar voice, Jolie becomes a pawn in a struggle she never knew existed.

Hauk knows he cannot have her, and resolves to protect his heart and his secrets. But as they work together and grow closer, he finds new reason to keep fighting. Dare he risk hope in a new life, one where Jolie can see past his ravaged face and where their friendship can grow into something more?


When I picked up How Beauty Met the Beast, to be completely honest I didn't really know what to expect from it. The blurb was intriguing enough but I kind of have a bad history with retellings or stories based on fairy tales, so although I loved the blurb I was a bit sceptical towards it. And I'm glad to say that any doubt I might have that this book wasn't the right for me, vanished pretty fast, as soon as I started reading Jax Garren's story. Because let me tell you, it's one unbelievably amazing and great one!

From the very first chapters of How Beauty Met the Beast I just fell in love with everything about it. The characters, the writing style, the story, the setting, everything! It was simply fascinating! I didn't even mind that one seriously sexy scene came way too early in the story (in the second or third chapter if I remember correctly). And if you follow my reviews, you know that I usually have a problem with those awfully early sexy scenes, when I don't even have time to get to know the characters of a book and start caring for them. But nooooo, Jax Garren pulled of that scene despite the fact that we knew next to nothing about Jolie and Hauk. And for me to connect with a set of characters so soon in the narration is a rare occurrence...

The best part about How Beauty Met the Beast in my opinion are the characters and their development. It's a rather small story, not too long, but Garren has written a character oriented story, one that speaks through its characters and their actions rather than anything else. And for a book of such length that was an impressive achievement. Believe me when I say it, because I have read books twice the size of this one where the characters couldn't be more flat...

I really liked Jolie and the way she was portrayed, her reactions to situations couldn't be more believable and the kindness of her heart was just heart-warming. Hauk on the other side is simply incredible. He may be so scarred that his mere sight scares people but he's so smart and compassionate and sexy that in my mind he's the most beautiful person in the world. So, like I said, the characters in this title are its main advantage!

The story is fast paced, making it hard to put my ereader down but at the same time I was so enjoying myself while reading it, that I wished that it would take me longer to finish it. And I haven't felt that way for a book for a really long time now.

Surely, there are many things that are left unanswered by the end of the book and it's not completely clear how the world Jax Garren created really works but I guess that I'll get my answers in the next book which can't be released soon enough!

All in all, How Beauty Met the Beast is one spectacular debut novel I absolutely loved and can't wait to get its sequel on my hands. A must read!

* This title was provided for review through NetGalley
Posted by Unknown at 17:13