REVIEW: Nobody's Baby But Mine by Susan Elizabeth Phillips

Nobody's Baby But Mine by Susan Elizabeth Phillips 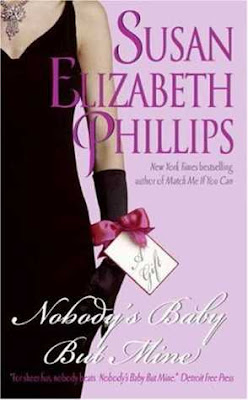 Genius physics professor Dr, Jane Darlington desperately wants a baby. But finding a father won't be easy. Jane's super-intelligence made her feel like a freak when she was growing up, and she's determined to spare her own child that suffering. Which means she must find someone very special to father her child. Someone . . . well . . "stupid."

Cal Bonner, the Chicago Stars' legendary quarterback, seems like the perfect choice. But his champion good looks and down-home ways are deceiving. Dr. Jane learns too late that this good ol'boy is a lot smarter than he lets on -- and he's not about to be used and abandoned by a brainy baby-mad schemer.

A brillant, lonely woman who dreams only of motherhood . . . A take no-prisoners tough guy who'll settle for nothing less than surrender . . . Can passion and physical attraction propel two strong-willed yet vulnerable people to a totally unexpected love?


Once more, I find myself in the minority of readers, but I will just say it: Nobody's Baby but Mine, isn't my favorite contemporary romance title, it's not even among the good ones I have read not I'm completely awed by it. There, I said it.

Don't get me wrong, I just love Susan Elizabeth Phillips. I just adore her writing style, the way she presents her stories, pretty much everything about this author, screams awesomeness to me. I just know that picking one of her titles guarantees that I will have a great time, even if I that said title isn't the best thing I have ever read. And that is the case with Nobody's Baby but Mine.

And to be completely honest, the fact that I didn't like this one quite as much as the previous two books in The Chicago Stars series, isn't the writing style or the narration or anything technical. Susan Elizabeth Phillips is just that good an author that I have no complain in those departments. My problem lays with the main two characters and as strange as it sounds, the story itself. I know, didn't I read the premise before I picked this book? Nope, I'm afraid I didn't... The Chicago Stars series is on the auto-buy list for me, so, I didn't think I had to read the premise before. My loss. Should I have, I'd know that the story of Nobody's Baby but Mine, isn't quite right up my alley. I mean, the basic story of this book is that: desperate woman is scheming to use a man she presumes stupid and leave her pregnant, she achieves her goal and all hell breaks loose.

Should I have read the premise before I picked up this book, I would know that I would have serious problems with the plotline. I mean, everything about the plotline is something I couldn't possibly like. I can't appreciate a heroine who judges by appearances alone and assumes someone - who she doesn't even know in person - is stupid just because he uses bad grammar or because he is an athlete... I just can't. So from the premise I would have known that the main heroine, Jane, would be one I'd have serious problems with... And I can't really appreciate the whole scheming part that Susan Elizabeth Phillips used in this book to bring her characters together, something I would have known as well, if I had read the premise... So, the only who is in blame here, is me. No one else. Should I have read the summary I would know what this story was all about, and then decided whether or not to go and read it. But since I didn't, I don't really feel justified to complain about all those things that spoiled the book for me, because it wasn't something revealed during the story: it was in front of me the whole time.

So, I'll just skip all that and focus on the fact that even though I didn't really like both the main characters and the main plot was nothing I could enjoy or relate to, I enjoyed readng Nobody's Baby but Mine. I may tried really hard to forget the first part pf the book especially and even if I didn't really succeed in moving past the parts that made me angry, I ended up enjoying this book in overall. Despite the fact that I couldn't really care about Jane even if she redeemed herself by the end of the story. Despite the fact that Cal may have been a far better character than Jane, but still I can't say I fell head over heels for him. And finally despite the fact that everything about the main plot of the story being somehow naive... I mean who in his right mind would end up marrying a woman who plotted in such a way against him, even if her intentions weren't precisely bad, just to divorce her as soon as the baby is born. I don't know if in 1994, when the book was written, a child couldn't be legitimate unless its parents are married, but I couldn't help but think about that solution the whole time and feel that Susan Elizabeth Phillips "made" Cal marry Jane just so they could spend time together and fall in love.

Anyway, before I end this review, there's one last thing I want to add. And that is that in my liking this book more than I probably should, a major role played the way Susan Elizabeth Phillips presented the story of Cal's parents. Now that, was a couple whose story I genuinely wanted to read about, I enjoyed every single minute of their interactions and that story with the cookies just broke my heart. And just for that cookies story, I felt that I didn't waste my time with reading this book. It was simply amazing.

All in all, Nobody's Baby but Mine isn't my favorite book in The Chicago Stars series, and the main couple, one I didn't really care about, but some of the secondary characters in this book, totally made up for the lack of good main ones. At least for me.