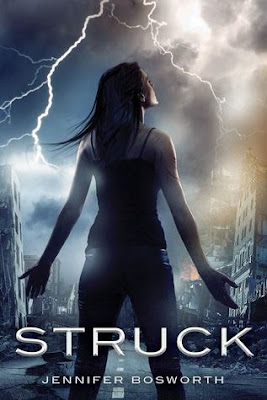 Mia Price is a lightning addict. She's survived countless strikes, but her craving to connect to the energy in storms endangers her life and the lives of those around her.

Los Angeles, where lightning rarely strikes, is one of the few places Mia feels safe from her addiction. But when an earthquake devastates the city, her haven is transformed into a minefield of chaos and danger. The beaches become massive tent cities. Downtown is a crumbling wasteland, where a traveling party moves to a different empty building each night, the revelers drawn to the destruction by a force they cannot deny. Two warring cults rise to power, and both see Mia as the key to their opposing doomsday prophecies. They believe she has a connection to the freak electrical storm that caused the quake, and to the far more devastating storm that is yet to come.

Mia wants to trust the enigmatic and alluring Jeremy when he promises to protect her, but she fears he isn't who he claims to be. In the end, the passion and power that brought them together could be their downfall. When the final disaster strikes, Mia must risk unleashing the full horror of her strength to save the people she loves, or lose everything.


When I started reading Struck and for almost the 2/3 of the book, I was certain that I had a true winner in my hands. And although this isn't a bad book, not by a long shot, I just have to say that by the end of it, my first good impression changed vastly I'm afraid.

I'll start with stating what I absolutely loved about this book and what I loved the most, is the unique world building and the way Bosworth designed the setting of her story. She describes a post apocalyptic Los Angeles, were people struggle to adjust to a world that is ruined , a world were kids go to school to get rations of food and not educate themselves, were people live in tents and wait for the coming of the end of the world. In that world of destruction and doom comes a self-claimed Prophet who is surrounded of his 12 Apostles and calls to everyone to follow him or die in sin. I just have to say that, many, may feel offended by the way Bosworth decided to portray that Prophet, may feel offended by the religious or not so religious, depends how you see the whole thing, content of the story but to be honest, apart from the fact that we are talking about fiction here, I found the whole thing "gutsy" and probably the thing I liked most about the book. Without really offending anyone, Bosworth approached a really difficult subject and I'm afraid that many will talk bad about this book, only because of that. But for that part alone, Struck, is a book I will remember for long after I finished reading it.

The writing style is also good and fresh and the pace of the story even. Add to that the fact that I was really intrigued by the two rival teams and what was really going on with the lightnings and you can easily understand why I absolutely loved this book at first. But unfortunately, a couple of details at first and the instant love part later made me change my mind about it.

As I said, the feel of this book was all doom and destruction, so imagine my reaction, when I read about Mia, mentioning her mascara smudges in the same page where the heroes are starving as well as the mention of Jeremy's (the hero) biceps in the same page where a vision of death is described. I know we are talking about details here, but those parts kind of threw me of since I found them a bit inconsistent with the whole dark atmosphere of the book.

And now, on to the part that really changed my mind about this book and that is non other than the infamous but ever present in many YA novels IL.

For the better part of this book, the romance was almost non-existent. Granted, I knew and expected were things were headed between Jeremy and Mia but the romance was only hinted, so it would make much more sense if things progressed in a much slower pace between them. After all, the whole story takes place in four days, so for two people to fall so helplessly in love so quickly while fighting for their lives, strikes as unbelievable to say the least. So, for about the first half of the book, things are going in a pace that makes sense and then suddenly the whole story takes an unexpected romantic turn that kind of felt like the author decided that it was about time that the romance should bloom between her two heroes and be done with it. It's just that one day Mia doesn't even know what to thing of Jeremy and his motives and the next day she trusts him completely and invites him for a sleepover...

Anyway, Struck, is a unique dystopian YA novel, that despite my problems with it, I honestly enjoyed reading, but I believe that it could have been so much better if not for some details that spoiled the final result. Because in essence, and if you take into consideration all the aspects of it that really matter, it is a really good book.

*This title was reviewed via NetGalley
Posted by Unknown at 14:00