REVIEW: You Don't Have to Say you Love Me by Sarra Manning

You Don't Have to Say you Love Me by Sarra Manning 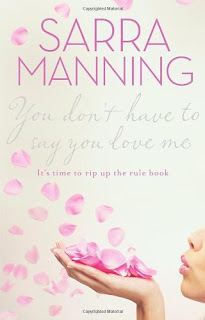 Sweet, bookish Neve Slater always plays by the rules. And the number one rule is that good-natured fat girls like her don’t get guys like gorgeous, handsome William, heir to Neve's heart since university. But William’s been in LA for three years, and Neve’s been slimming down and re-inventing herself so that when he returns, he’ll fall head over heels in love with the new, improved her.

So she’s not that interested in other men. Until her sister Celia points out that if Neve wants William to think she's an experienced love-goddess and not the fumbling, awkward girl he left behind, then she’d better get some, well, experience.

What Neve needs is someone to show her the ropes, someone like Celia’s colleague Max. Wicked, shallow, sexy Max. And since he’s such a man-slut, and so not Neve’s type, she certainly won’t fall for him. Because William is the man for her… right?

Somewhere between losing weight and losing her inhibitions, Neve’s lost her heart – but to who?

Review published at Book Lovers Inc
You Don't Have to Say you Love Me by Sarra Manning surprised me!Really and pleasantly surprised me!Though why it came as a surprise since I only heard good things about it, I really can't say.
Sarra Manning created a set of unique and quite memorable characters, whose story was a pure delight to read! Neve, the main heroine is a person with many personal problems let me say that before anything else. She has such a low self esteem I just wanted to smack some sense into her! Granted, her childhood (she was bullied at school) and the fact that she was really overweighted in the past are enough reasons to justify her low self esteem. Throughout the whole book she has such a false image of herself that most of the problems she has in her personal life are self inflicted. She keeps punishing herself and her body over and over again until the very end of the story. But despite the fact I couldn't agree with all her decisions, Neve is a real woman. A woman who has to deal with a really pressuring image, the media are imposing on us, with real problems that I couldn't help but love and see attributes of her in myself or in friends of mine. After all, who hasn't felt the pressure even once in her life to have the perfect body of models or actresses? We all had a diet even once in our life and never, I mean never we are satisfied with what we look at in our mirror. Even the most stunning woman has something that she dislikes about herself and works to improve. Whether I still agree with the pains we go through to achieve that elusive perfect image is a whole other matter.
Max, the hero, is a man with a lot of personal problems himself. Maybe of a different nature than those of Neve's but still, Max has his own issues... And let me just tell you that he's adorable! Seeing those two real characters trying to get past their personal problems and becoming happy first and foremost with themselves and then with everything else, was a pure delight!
The book is quite a long one, with many details, but I didn't feel tired or bored not for a single minute.The pacing of the story is even, the tension between the main characters delicious and all in all, Sarra Manning created a story that goes straight into the shelf with my favorite books!
Just do yourselves a favor and read this book.You won't regret it!