REVIEW: Carrier of the Mark (Carrier Trilogy,#1) by Leigh Fallon

Carrier of the Mark by Leigh Fallon 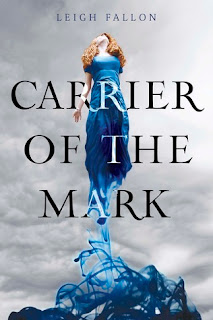 Their love was meant to be.

When Megan Rosenberg moves to Ireland, everything in her life seems to fall into place. After growing up in America, she's surprised to find herself feeling at home in her new school. She connects with a group of friends, and she is instantly drawn to darkly handsome Adam DeRÍs.

What can I possibly say about Carrier of the Mark??? How to put my thoughts into order and start this review? Honestly, it's the first time I have ever wrote down so many notes while reading a book that I could easily write one of own. Yeah, as you can guess, I didn't exactly fall in love with The Carrier of the Mark...
And how could I, when for the first half of this book I kept wondering whether I was indeed reading a fresh new book or I had somehow mistakenly ended up with a copy of a good fanfiction of the much famous Twilight. Don't get me wrong, I surely had heard about all the similarities between the two novels before I decided to pick it up, but let's face it, we all know that there are a number of books out there that have some similarities to other rather successful novels (Twilight, Vampire Academy, Vampire Diaries you name it) and since that has never stopped me from either reading a book or even enjoying it in many cases, I thought to give this book a try.
So, in The Carrier of the Mark, we follow Megan, a girl who leaves with her father and moves to Ireland. She's the new girl, and while at her first day at school, she immediately notices Adam, who is gorgeous (duh!) but apparently such a snob as Caitlin (her new best friend in Ireland) kindly informs her. They lock gazes and voila, Meg can't seem able to stop thinking of that gorgeous, unapproachable snob. While we follow Meg through her first day at school, Adam treats her badly and rudely. Meg is bothered with his unjustified behaviour and tries to figure out why is he treating her that way. She soon observes, that the members of the DeRises family keep to themselves, only enjoying each other's company while the whole school talks ill of them and accuses them of being weird and with a dark past. That is of course until Bella, sorry Meg, comes into the picture... Enough similarities already? No? Okay, I have more...
Adam and Meg barely speak to each other until Meg has an accident and Adam saves her under mysterious circumstances. He then, avoids her. When she confronts him and asks him of the weird circumstances of her rescuing, he of course makes her feel she's mad. Until the night of the Halloween Party where Meg is attacked by two guys and Adam runs to her rescue. Soon after, they go to the party together where everyone is staring and pointing at them and then, Adam declares his feelings to her. By that point of the story I was screaming out loud for some creativity...
Honestly, the first half of the book was like reading Twilight again, with some minor changes in names and settings and the whole surrounding story. Other than those, the story was progressing exactly like in Twilight as it is more than obvious. For me, it is a whole other matter for some books to share some similarities and a whole different to be almost exactly the same. Should Carrier of the Mark just had a number of things same, I would honestly not mind at all. But please. The first half of the book was like a re-read and I could never be okay with that.
Twilight similarities aside, I also had a lot more problems with this book. For one, the characters seemed lifeless. I couldn't connect with Meg no matter what. It was like she had no spark, no life. She acted so foolishly, or to phrase it in her own words "pathetic" around Adam.
I couldn't possibly understand her feelings towards him. There was nothing between them and yet she all but thought of him. And the fact that everyone assumed that Adam had the hots for her while truthfully they all but exchanged some glances and barely even spoke a couple of times, frustrated me to no end. I can't even say that what bothered me here was the Instant Love thing. Cause truthfully, there's no IL. All there is, are two teenagers who stare at each other. Nothing else. Sure, the way they declare their undying love later in the story is a fine specimen of IL, but in the beginning there's nothing to justify their attraction. Nothing to make me feel that those two have feelings for each other.
Anyway, apart from all those cheesy lines that were used in this novel and made me roll my eyes again and again, the second half of the Carrier of the Mark was far more decent. The similarities ended somewhere in the middle of the book (except a bit before the end where they resurfaced and Meg is chased down by a Tracker...) , and from that point after, Fallon created something far more unique. I liked the whole Carriers myth and how she used Irish mythology in her story. I may still had problems with her heroes and their reactions ("I know a guy for a total of 6 weeks, I'm with him for the past two,I'm 17 but you know what, I will pass the opportunity to save the world just to be with him cause he is the one", kind of thing) but I have to acknowledge the author's talent in the second half and believe that she has potential of creating far more enjoyable and unique books. Cause Fallon's voice is strong and she manages to grab her reader's interest even while reading something far from creative. Imagine what she could do otherwise.
Anyway, I can't recommend this book to anyone who is in search of something unique, but to anyone out there who wants a book resembling to Twilight or doesn't mind the similarities, Carrier of the Mark is just the book to pick.