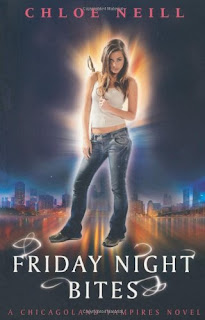 
Ten months after vampires revealed their existence to the mortals of Chicago, they're enjoying a celebrity status usually reserved for the Hollywood elite. But if people learn about the Raves-mass feeding parties where vampires round up humans like cattle—the citizens will start sharpening their stakes.


So now it's up to the new vampire Merit to reconnect with her upper class family and act as liaison between humans and bloodsuckers, and keep the more unsavory aspects of the vampire lifestyle out of the media. But someone doesn't want peace between them—someone with an ancient grudge…

I really enjoyed Friday Night Bites!Although it has been quite sometime since I read the first book of the Chicagoland Vampires series and I was a bit afraid that I would find it hard to remember the storyline and get into this book,I didn't encounter a problem whatsoever.
As I said,it's been sometime since I read Some Girls Bite,more than a year to be precise,and since in the meantime I read many other books,it was only logical to assume that I had forgotten everything about the storyline.Surely,some of the basics I did remember but only that.But as soon as I picked up Friday Night Bites everything came to mind so easily,it was like I read the previous book only a month before and not a year.Chloe Neill does a fantastic job of reacquainting her readers with her story,without boring details and without slowing her actual storytelling.It was perfect for me!
The universe Neill has created is intricate,full of vampire politics and action and her characters are well developed and substantial.I love Merit and her way of dealing things and the romantic element with Ethan is fantastic!There so much sexual tension between them that I can't wait to see how things will progress for them!
The only thing that tired me a bit,was the first half of the book,were things were progressing a bit slowly,and all those mentions in politics.I understand that vampire politics play a huge part in the world building but still,I found myself once more a bit tired of them.I'll get used to them though!
No need to say,I go straight from book 2 in this series to the next,Twice Bitten!I just can't wait!